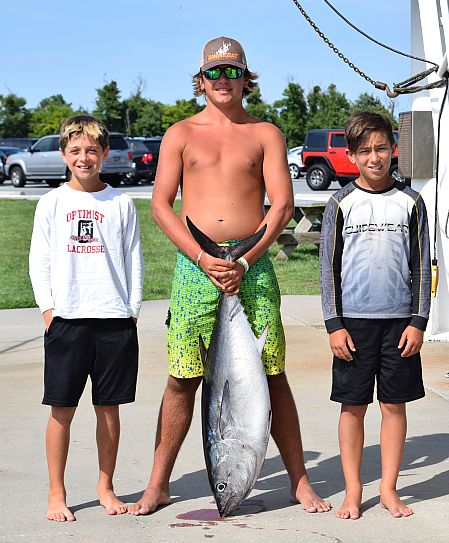 Friday was day three of the Flounder Pounder Tournament held out of Paradise Grill and sponsored by Shorts Marine.  The leaderboard showed no change in the top three spots with Stalker in first, Sea Hawg in second and Team El Nino holding down third.

Amanda at Lewes Harbour Marina said Dave Walker caught a 10.5-pound flounder while pre-fishing for the Flounder Pounder Tournament.  Bob Quinn had a 5.15-pound flounder at the Old Grounds on long squid strips.  Michael DeBlasis caught an 18-inch flounder out of the Lewes and Rehoboth Canal.  Rick Mills and Jack Henriksen had a good catch of triggerfish and a porgy out of the bay.

Dave at Lighthouse View Tackle said not many anglers were out on the pier at Cape Henlopen State Park due to the heat.  Those who did fish had a fair catch of spot on bloodworms.

Burt at Hook ‘em and Cook ‘em told us there were a few flounder and sea bass caught on the head boats.  Croaker were caught outside the Inlet.