Despite Saturday’s rainy weather, a group of dedicated activists led a protest march through Dewey Beach which ended at town hall. After the march, Jeffrey Smith, of the Dewey Citizens for Accountability, told reporters that the residents want accountability in regard to the police department’s participation in the LESO program. 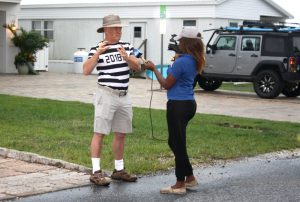 Jeffrey Smith, of the Dewey Citizens for Accountability, talks to reporter Nicole Edenedo after Saturday’s protest march.  He was wearing a black and white striped T-shirt making reference to his recent arrest where he was accused of stealing a draft of the town’s audit report. Image courtesy WGMD/Alan Henney.

“They want to know where these vehicles are… where the only armored Humvee in the state is… We also want to know where all the militia-type equipment of $2.8 million went,” Smith said. “It is the town’s stuff… The money should go to the town and we should get out of the paramilitary police business because this is a peaceful town and this is not one that needs armaments for war,” he added.

Also attending the march was David Moskowitz, a CPA and CFA who is a candidate for town commissioner. He expressed concern for the audit report that the town had commissioned by the TGM Group, an independent auditing firm, which examined the police department’s participation in the LESO program. 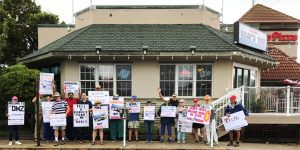 “The report was altered before the audit committee got to read it,” he stated. “I did a FOIA and I saw that for myself. People use fraudulent reasons like the ‘Dewey Beach firing range’ or ‘open search and rescue missions’ and they [the police] got a bunch of equipment and nothing was ever done,” he stated.

Indeed, the audit report was produced, but Moskowitz asks, “Who is held responsible? There has been no discipline and the election is next week. If elected, Moskowitz vows to have a robust audit committee which will implement internal controls so that the “conflict of interests ends.” He also wants these controls implemented to avoid similar situations from arising in following years.

Moskowitz also stated that the TGM audit only covered equipment worth more than $25,000 which excluded more than 99 percent of the items obtained under the program, although city officials disagree. 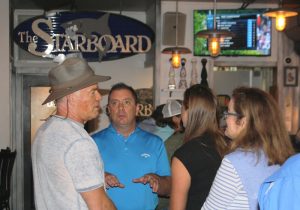 A few blocks away, holding a meet-and-greet at Starboard Raw was William Stevens, the other newcomer running for town commissioner. “The program itself has been beneficial to this town,” Stevens stated, noting that LESO has allowed police to procure free equipment and supplies.

“Now the problem is that there is a little uncertainty to the transparency of what was done or how it was done and this year’s audit kind of brought that to light,” Stevens said. “The outcome gave us the policies and procedures to make sure that everything is documented and that everything is the way it needs to be.”

“I think that we need to look at it as a positive thing that is cleared up and that it is on the surface and that we need to move forward and be responsible and I think we are going to continue to do that,” Stevens said.

“I believe the auditors did a good job,” Stevens added. “I believe that they went and they did all the proper accounting processes. They capitalized based on the town’s capitalization policy and they put it on the books. We are going to continue to improve.”

More than 30 Delaware towns use the LESO program, notes Joy Howell, former town commissioner, who is putting her energy behind supporting Stevens for commissioner. The LESO program is a “great way for the police to take surplus equipment, auction it off, get the equipment they need, and then we don’t have to pay for it,” she pointed out.

Comm. Bauer says the auditor went to the auction houses and checked every police officer’s name to determine if they received a check. The checks that the auditor found, he said, matched what was received in the town’s accounts.

“So how deep do you want to keep going?” Comm. Bauer asks. “We could go to an auction house in Australia that they sold the stuff at. I don’t think it happened… How would you ever know if every piece of equipment is still there? If you go up to the lot you will see stuff that has been pulled apart. There are parts all over the place because they cannibalized a lot of things.”

“They just want to attack the police,” Comm. Bauer charges. He too favors continued use of the program. “The stuff that you need that you can get for free, get it for free. Let’s spend the town’s money wisely,” he adds.

As far as people demanding resignations, Comm. Bauer says the police broke no federal laws. The federal government has not removed Dewey police from the program. The state plan of operation was followed. “Frankly, the town had no policies or procedures that they were supposed to follow… you can fix it going forward,” he noted.

Citizens have expressed concern regarding disposition of equipment and funds, something that is hard to prove or disprove at this point.  Items valued at under $5,000 were not placed on the town’s books, Comm. Bauer stated. But it was still counted, he maintains.

“Everything was accounted for that was not sold or traded away by the police and town from the past,” says Mayor TJ Redefer, noting that he is confident in the town’s police department when it comes to honesty and integrity. 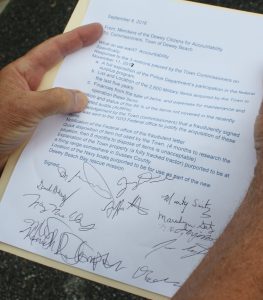 Once again Dewey has allowed a single issue to dominate the election cycle this summer. As a former town commissioner, Howell says she is concerned that this discussion should have been spent on other important topics such as the concerns residents have expressed regarding the ongoing Ruddertown project.

Comm. Gary Persinger, the only incumbent this election cycle, said he had no comment regarding the ongoing audit debate. He also had no public events or appearances planned this weekend.

The election is Saturday, September 15, but many voters have already submitted their absentee ballots and may continue to do so this coming week. For election/voting info see the town’s website.