The City of Seaford is open for business, and everyone has a right to work. Yesterday, Mayor David Genshaw and other city officials unveiled the nation’s first right-to-work ordinance enacted by any municipality above the Mason-Dixon Line.

Mayor Genshaw says the only reason he and his colleagues come to work is to help Seaford and to figure out ways to stimulate growth in the Nylon Capital of the World.

“Everything we do here has got a basis in business development, to grow and to retain companies and people here” said Genshaw. He says when the Council was reviewing economic development success stories across the country, enacting right-to-work ordinances was a common theme. 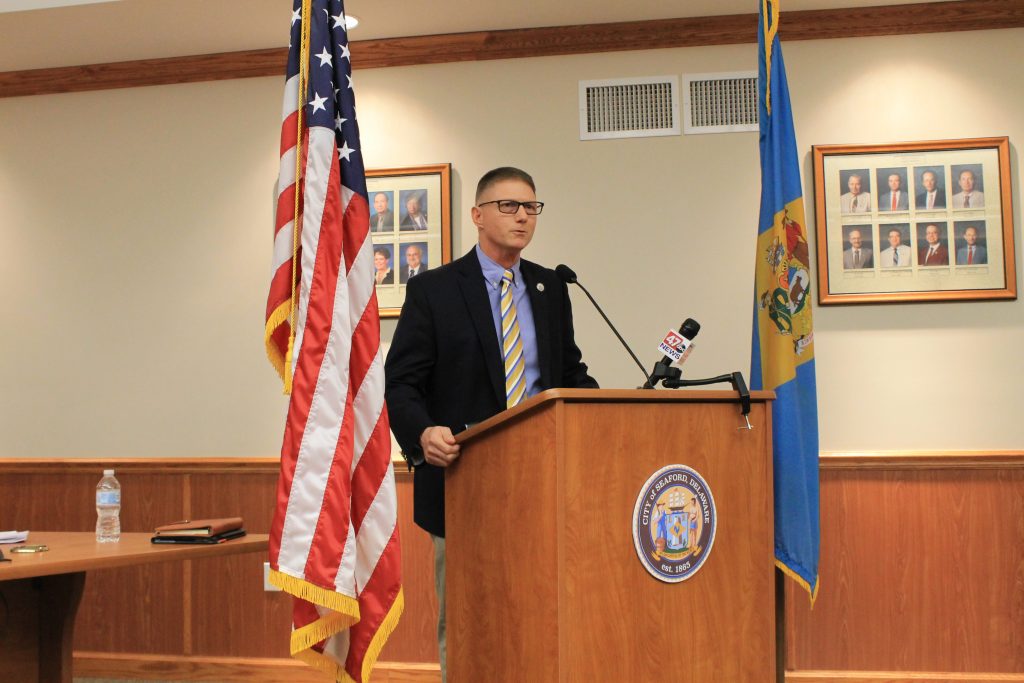 Genshaw said Seaford is not currently targeting any specific industries, like automobile manufacturing. He says the city needs jobs period. Vice Mayor Dan Henderson echoed those sentiments, saying Seaford has been letting its best resource– its citizens– go to waste.

“This city and the surrounding communities needs jobs that make or support value added products. For far too long we have exported our most valuable resource because of lack of opportunities: and that is our people,” said Henderson.  “We are seeking a return to a condition where an export of new products helps retain our brothers, sisters, sons, and daughter in Seaford.”

Mayor Genshaw says the city council is only ever motivated by growing the economy, that the ordinance is legal and not politically motivated.

However, he said there were no public hearings before the city council vote on the ordinance, because the city did not need to hold any. And there is at least some opposition; one Seaford resident, Dan Cannon, attended to press conference to voice his displeasure. He tells WGMD that while not a lawyer, he believes right to work in Seaford is illegal and that he would sue if he had legal standing. Cannon says he thinks the Council simply cherry-picked language from Sussex County’s failed right-to-work ordinance while turning a blind-eye to the problems in it pointed out by state attorneys. Mayor Genshaw says he is not worried about legal challenges to the city’s new right-to-work ordinance, and that the city is focused on bringing jobs to the area. Still, Genshaw admits the city has its work cut out for it.

“One thing I want to make clear though, is that: this is not a silver bullet. We did not win the lottery. We do not expect any kind of instant success, but it will be a process,” says Genshaw. “So over the next three, six, nine, 12 months we’ll be rolling this out and we’re excited about the opportunity of what’s going to happen.”

He went on to say the success is not in passing this right-to-work legislation, rather that victory will come when he and city council members go out to ribbon cuttings and ground breakings in the future.