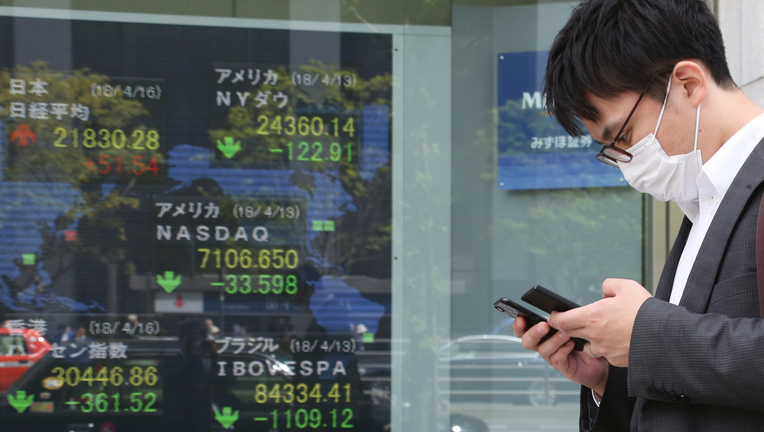 Shares were mixed in Asia after an upbeat start to the week, with Chinese benchmarks leading decliners. The air strikes on Syria appeared to be having scant impact on trading Monday. Eyes were on Chinese GDP data due on Tuesday.

MIDDLE EAST: The leaders of Russia, Iran and the Hezbollah group in Lebanon said Sunday that Western airstrikes on their ally Syria, targeting its chemical weapons program, have complicated prospects for a political settlement to the country’s seven-year conflict. Meanwhile, President Donald Trump on Sunday defended his use of the phrase “Mission Accomplished” to describe the U.S.-led missile attack, while his aides stressed continuing U.S. troop involvement and plans for new economic sanctions against Russia for enabling the government of Bashar Assad.

ANALYST VIEWPOINT: “The markets are taking the surgical strike at the heart of Syria’s chemical weapon program in stride as traders had priced in this outcome with a high degree of probability,” Stephen Innes of OANDA said in a commentary. He added, “With trade war and now Syria fatigue likely to set in, however, it’s best not to get too comfortable at this point as market risk sentiment swings will remain large this week.”

CHINA TRADE: The Trump administration on Friday targeted China and five other countries including allies Japan and South Korea for special monitoring for what the administration says are practices that are worsening America’s trade deficit. But the impact on financial markets in Asia was limited as it comes at a time of even harsher threats of U.S. penalty tariffs on China and other nations.

CHINA ECONOMY: Chinese shares declined ahead of the release of economic growth data that are expected to show the economy overshooting the official target to sustain a 6.8 percent annual pace in the first quarter of the year. Tuesday’s report of monthly figures for March, the first since the lunar new year holidays, will provide fresh insights into conditions across the world’s No. 2 economy.

ENERGY: Oil prices fell back from spikes last week on fears over an escalation of strife in the Middle East, with U.S. benchmark crude falling 58 cents to $66.81 per barrel in electronic trading on the New York Mercantile Exchange. It gained 32 cents on Friday to $67.39. Brent crude, which is used to price international oils, fell 73 cents to $71.85 per barrel.