UPDATE:  11:30pm – A small plane crashed Friday morning just before 9:30 near the Assateague Greens Golf Center off Stephen Decatur Highway in Berlin.  Maryland State Police say the plane had just taken off from the Ocean City Airport with two people on board.  Both Guerrino and Mary Mascelli of Berlin – both 60 – were able to get out of the burning plane.  Guerrino Mascelli was flown to PRMC, Mary was taken to PRMC by ambulance.  The crash remains under investigation. 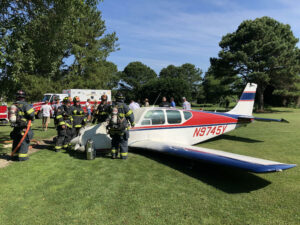 Ocean City Fire and emergency personnel were called to the Assateague Greens Golf Center in the area of the 8th Fairway off Stephen Decatur Highway in Berlin just after 9am after a report of a plane crash. At least one person is being flown to Baltimore. Officials have placed the scene under control.