Home NEWS A WGMD Crime Watch Article California Man Arrested in Dagsboro for Possession of Over 200 Pounds of...
Facebook
Twitter

Delaware State Police say that along with Dagsboro Police, they have apprehended and charged a California man on numerous drug related offenses following a traffic stop in Dagsboro on Sunday afternoon.

Troopers say 57-year-old Charles Mulvihill of Ukiah, California was pulled over in a tan Ford F-250 with California tags shortly after 1:30 p.m. on DuPont Blvd. Law enforcement officials had determined the driver was operating the vehicle while on a suspended license. The driver later confirmed he was on a suspended registration and did not have proof of insurance. Police also determined the vehicle was required to be outfitted with an ignition interlock device, but was not. 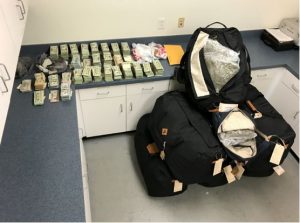 Mulvihill was taken into custody without incident and transported to DSP Troop 4 where he was charged with the following:

Mulvihill was committed to Sussex Correctional Institution in lieu of 81,701 dollars secured bail.