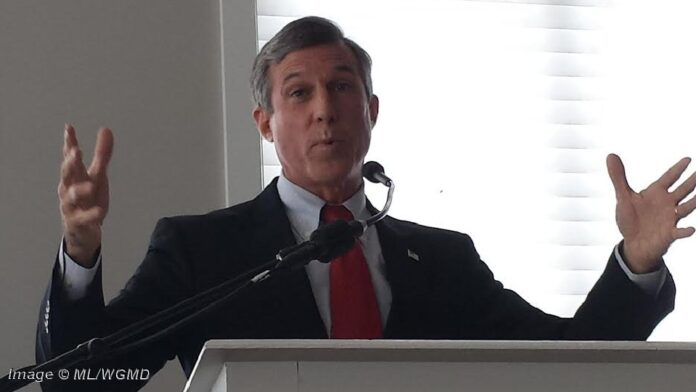 Delaware Governor John Carney claims he never closed churches during the coronavirus (COVID-19) shutdown after a pastor from New Castle County filed a lawsuit on the matter.

During a press conference Tuesday, Governor Carney claimed he “never officially closed them down” or deemed them non-essential during the shutdown.

“We never officially closed them down,” Gov. Carney said. “They were always designated as an essential service, and tried to apply public health principles to protect the worshipers.”

Churches, along with mosques, synagogues, and other places of worship were in fact strictly limited during the shutdown, resulting in their closure, as congregations and fellowships over the amount of 10 people were not allowed inside over social distancing guidelines implemented by the Carney Administration.

Reverend Dr. Christopher Bullock of New Castle filed a lawsuit citing the Governor’s actions in the State of Emergency, claiming they are in violation of the constitution.

“The Churches – the voice of the people, the voice of morality, the voice of love, and power, and hope which is so desperately needed in these dark times – are muzzled,” Rev. Bullock stated. “The Churches need to be open and people need to be blessed by what the Churches, the Synagogues and the Mosques have to offer the people. People of Faith are not second-class citizens in our Country. Churches have to stand up on their convictions and not allow the state or any other government official to tell them what they can and cannot do as it relates to worshiping the Almighty and sharing the love, fellowship and encouragement of fellow Believers.”

According to the lawsuit, up until May 20, Rev. Bullock’s church struggled to operate under the Governor’s ‘10 person only’, thereby limiting religious worship to a pastor and nine people. In addition, the lawsuit also states that the Governor has publicly admitted that the actual effect of his 10 person only limitation is that churches throughout Delaware are unable to operate.

The lawsuit seeks a temporary restraining order from the courts to prevent the Governor from interfering with or prohibiting in-person religious worship.

WGMD’s Rob Petree reached out to Governor Carney’s Communications Director, John Starkey, who said churches were always essential under Delaware’s stay-at-home order, and that’s the point the Governor was trying to make.

“Churches were always essential under Delaware’s stay-at-home order. That’s the point he was making. There were public health precautions in place – not just in churches but statewide – that are/were intended to keep people from getting sick and dying from COVID-19,” Starkey stated. “For the past several months, we’ve been going through a global pandemic that has killed nearly 100,000 people in the U.S. We still face a very serious situation. Governor Carney has been in regular communication with faith leaders across the state with the goal of keeping Delawareans healthy throughout this pandemic. Delawareans and all Americans have a fundamental right to practice their faith. Governor Carney understands that, and spoke at length to this issue yesterday.”

Starkey added that the Governor has heard from faith leaders who have asked him to lift restrictions, and from others who argued to keep them in place at churches and other houses of worship.