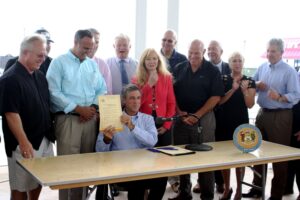 “An oil spill of some sort could negatively impact the fragile tidal wetlands and ocean beaches, and habitat here on the coast of Delaware,” Gov. Carney pointed out. “We are obviously concerned about the impact on the tourism industry here in Southern Delaware… a $7 billion industry that hires tens of thousands of employees.” Fundamentally, he added, these bills are “about protecting the natural environment of our state.”

Senate Bill 200 prohibits drilling for oil and natural gas in Delaware’s coastal zone and territorial waters, and precludes DNREC from issuing any permits in connection with the development of offshore drilling infrastructure, whether proposed for Delaware territorial waters or waters outside the state. This legislation will help maintain high-quality coastline waters and protect thousands of jobs supported by Delaware’s coastal tourism industry.

Senate Substitute 1 for Senate Bill 207 opposes drilling off Delaware’s coast and directs certain state officials and agencies to enforce Delaware’s rights relating to offshore drilling under federal and state environmental laws. This legislation allows the Delaware Department of Justice to take appropriate legal steps to protect the environment and tourism economy and prevent the sale of oil and gas leases for Delaware’s coastal waters.

The state’s jurisdiction extends only three miles from the coast. So the challenge becomes what to do to prevent drilling beyond the state’s jurisdiction. “As a state entity there is only so much that we can do,” says Sen. Stephanie Hansen who sponsored Senate Substitute 1 for Senate Bill 207. “We can’t say to them, you can’t drill here. But what we can do is make it extremely difficult for them. We can cause it to take a long time. We can make the federal consistency review process very laborious, very detailed, which is exactly what we want.” 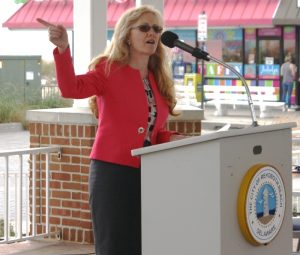 Her bill directs state agencies to examine and tighten current laws and regulations regarding offshore drilling. “Now that we know that there is a direct threat of this,” Sen. Hansen stated, agencies should “go back and take a look at those laws and regulations with an eye to knowing what we are trying to prevent, and see if there is anything more that we can do, and come back to us and let us know what we can do to take the next step in the General Assembly to tighten things up. So that is one big thing that this bill does.” 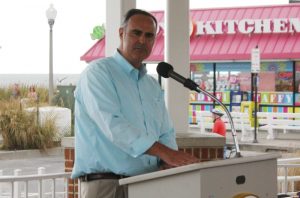 “We were on the map, and that was a big concern,” says Sen. Ernesto Lopez, sponsor of Senate Bill 200. “So we felt it important to make a strong statement and we did that here today,” he added. “I am really proud that we were able to make this a bipartisan piece of legislation,” Sen. Lopez added. “It makes a strong statement that we believe and defend our coastline and that we always will and now it is a Delaware law!”