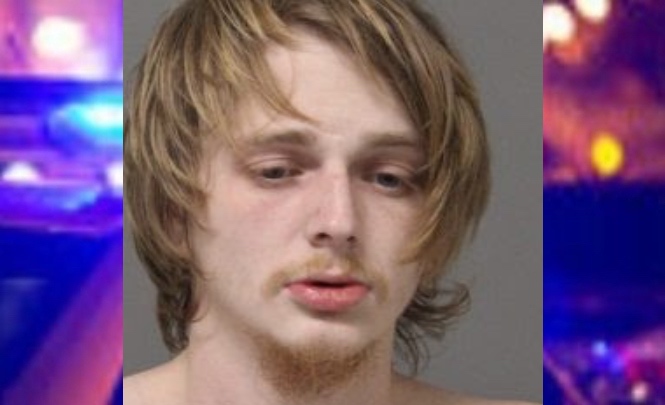 Police say a Laurel man was arrested after he attacked two cars that nearly hit him as he walked down Samuel Hill Road drunk.

According to the Delaware State Police Department, around 4 p.m., Wednesday troopers were dispatched to the area of Samuel Hill Road and East Trap Pond Road in Laurel for a disorderly complaint.

When police arrived they met with a 38-year-old male victim who said while he was traveling on Samuel Hill Road, a man later identified as 24-year-old Gideon F. Sisk, ran out in front of his vehicle. He then swerved in order to avoid hitting him.

The victim proceeded to stop to check on Sisk, at which time he became disorderly and threw a can of beer at his vehicle. Sisk then threw a knife at the rear window of victim’s car, causing it to shatter.

A second victim, a 16-year-old female, was also traveling on Samuel Hill Road when she came in contact with Sisk.  Sisk started yelling at the victim and approached her front passenger side window.

Sisk proceeded to stab the top of the door frame with a knife, leaving a small puncture hole.

Both victims left the area uninjured, according to police.

Troopers made contact with Sisk at his home on Samuel Hill Road in Laurel, at which time they smelled an odor of alcohol. He was taken into custody without incident and transported back to Troop 5 where he was charged with Aggravated Menacing (2 Felony counts), Criminal Mischief (2 counts) andDisorderly Conduct, Drunk on a Highway.

Sisk was arraigned and committed to the Sussex Correctional Institution on $12,301 cash only bond.