The Delaware Office of Highway Safety (OHS) kicked off its “Pedestrian Safety at the Beach Campaign” at the Sussex Family YMCA in Rehoboth this past Monday. The event also marks the start of pedestrian enforcement period from June 5 through June 19, part of a month-long grassroots initiative designed to build awareness and educate the public about pedestrian safety at the Delaware beaches.

“With the summer tourist season in full swing,” says Mitch Topal, OHS public affairs and marketing specialist, “Delaware beach communities will see a huge surge in traffic and pedestrian activity as well as bicycle activity and that could be a deadly combination which is why we are here kicking off an aggressive media campaign while at the same time funding stepped-up law enforcement during the summer months.”

During 2017, 34 pedestrians were struck and killed in Delaware which was seven more than in 2016, Jana Simpler, OHS director, told the audience. “Every one of those is a brother, a sister, a parent or grandparent, a sibling, a friend, a spouse, etc. Even one is too many,” she added. 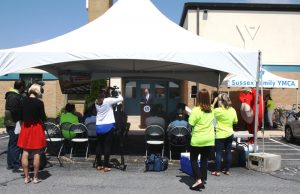 The Delaware Office of Highway Safety (OHS) kicked off its “Pedestrian Safety at the Beach Campaign” at the Sussex Family YMCA in Rehoboth this past Monday. Image courtesy WGMD/Alan Henney

In this region, most pedestrian deaths occur during the summer, of which 60 percent are the result of pedestrians under the influence and/or drivers failing to see them on the roadway.

“Both the drivers and walkers are cautioned to put down the cell phones since the electronic distractions are seen in increasing numbers of pedestrian crashes,” warned Rehoboth Beach PD Chief Keith Banks. “Other factors for drivers include unsafe speed, and failure to see and yield to pedestrians in crosswalks and in intersections,” he observed. “For pedestrians, the major dangers are jaywalking and thinking they can be seen at night especially while wearing dark clothing,” Chief Banks added.

A “walk safe” campaign was initiated back in 2013 when Ocean City experienced a rash of fatal pedestrian accidents. Officials say the success of the program cannot be credited to a single individual or single agency; rather it is through the efforts of the various agencies that helped reduce the number of pedestrian-related crashes since 2012.

Officials are promoting pedestrian safety this month with a multi-pronged initiative which includes ads like this one on the Jolly Trolley. Image courtesy WGMD/Alan Henney

This summer Simpler says her agency and its partners have developed a multi-pronged approach that includes enforcement, education, outreach and working with corporate partners. OHS is asking police to conduct overtime enforcement on pedestrian safety, particularly in the beach area. “We will be conducting overtime enforcement to encourage pedestrians to walk safely, specifically to use crosswalks and use flashlights,” she said.

“Many of the pedestrians are struck in low-light conditions,” Simpler pointed out. “We are encouraging everyone to use flashlights, walk against the traffic, and most importantly, do not walk impaired. We found out about half of the fatalities that we experienced last year were impaired pedestrians. So in addition to encouraging you not to drive, we encourage you not to walk impaired, and instead use a ride-share service, taxi or sober friend to get home,” she said.

OHS will deploy “street teams” to educate the public surrounding this enforcement period, and will distribute glow-in-the-dark bracelets, key chains and reflectors for pedestrians to use during the summer months. Image courtesy WGMD/Alan Henney

OHS will deploy “street teams” to educate the public surrounding this enforcement period, and will distribute glow-in-the-dark bracelets and reflectors for pedestrians to use during the summer months. The OHS Crab mascot will be out and about engaging with the public and pedestrians, encouraging them to walk safely, as well as provide wristbands that will improve nighttime visibility, she added. 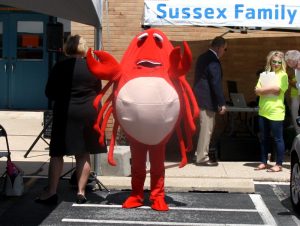 The OHS Crab mascot was based on the ChesWic mascot used by Ocean City in its Walk Safe campaign. Image courtesy WGMD/Alan Henney

In addition, both small and large corporate partners have been asked to distribute highway safety posters and fliers, and offer safety talks to their employees to encourage them to walk safely.

Pedestrian fatalities made up about 29 percent of the traffic-related fatalities in Delaware last year, says Robert Coupe, Department of Safety & Homeland Security secretary. He added that these are “often preventable if individuals practiced the fundamentals of pedestrian safety… fundamentals and following the basics.”

The YMCA staff, he pointed out, “Makes sure to cover the fundamentals and the basics and that approach holds true to pedestrian safety as well. When it comes to pedestrian safety… we still need to teach children and remind adults about fundamentals like crossing at an intersection, looking both ways before crossing, walking with a light at night, walking to facing traffic, using sidewalks when available and not walking near the roadway when intoxicated.”

“There will be thousands of vacationers coming to our beautiful beaches this summer,” Sec. Coupe stated, “and the OHS is committed to working with our partners to ensure that our vacationers have a positive and memorable vacation experience and not marred by tragedy.”