Man Flees in Mercedes from Traffic Stop in Downtown Rehoboth

It’s not something that happens often in downtown Rehoboth Beach.

Last night, when police attempted a traffic stop in the second block of Baltimore Avenue, the man driving this silver Mercedes sped off and led police on a 90-second pursuit across downtown Rehoboth. Police said the car had a fictitious Delaware license plate.

It started around 7:05 p.m. just west of First Street. As the officer attempted to stop the driver for the violation, an unknown passenger exited the car and the suspect drove off in the Mercedes headed west to Second Street, then south across Rehoboth Avenue, and west on Christian Street. He failed to stop at the stop signs and for the red light and failed to yield to pedestrians in the crosswalk, police said.

The chase ended here on Rehoboth Avenue at the crossover from Christian Street. He was surrounded by police cars and was boxed in after a fender-bender with a Honda Accord. Police say he struck one of the police cars too as he attempted to continue to flee.

As officers were taking the driver into custody he attempted to discard a bag of suspected drugs, police said. Officers found various suspected drugs including cocaine, heroin, oxycodone and marijuana in the car along with paraphernalia related to drug distribution.

Amazingly, nobody was injured. 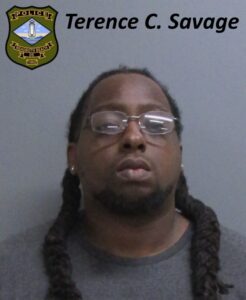 Savage was presented before the Justice of the Peace Court #3 for a bail hearing and committed to the Department of Correction in lieu of $7150 secured bail.