Rehoboth Beach police have charged Karisma D. Wynn Sheeler, 23, of Montgomery Village, Md. with two counts of felony-level resisting arrest Thursday after police said they attempted to stop her for questioning in connection with a shoplifting investigation. 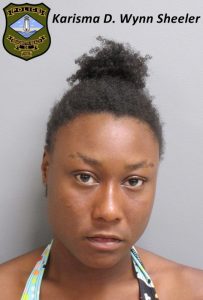 Around 3:40 p.m., an officer on foot patrol was contacted by an employee of Tidal Rave, which is in the ocean block of Rehoboth Avenue, who reported that a shoplifting had occurred in the store.

Sheeler, who was leaving the area of the store, police said, was identified as the suspect.  The officer attempted to stop Sheeler and have her return to the store so that he could investigate the allegation at which time Sheeler refused, police said.

Sheeler became uncooperative and disorderly yelling profanity and causing alarm to the other members of the public in the area, police said. When officers attempted to take her into custody, she refused and fought to prevent them from doing so.

Through the efforts of three police officers, Sheeler was eventually restrained and taken into custody. She showed signs of intoxication, police said.

It was later determined that Sheeler was an acquaintance of the shoplifter, but did not commit the offense, police said.

Sheeler was arrested and charged with 2 counts of felony resisting arrest with force or violence, 1 count of menacing, 3 counts of disorderly conduct, and 1 count of failure to comply with taking of photos and fingerprints. The last five charges are all misdemeanor offenses.

She was committed to Sussex Correctional Institution in default of $5800 cash secured bail.  As a result of her resisting, two police officers and Sheeler received minor injuries.