It took more than 30 minutes for multiple agencies to locate a couple who fell from a kayak in the Rehoboth Bay just before 11:30 a.m. today during a blustery rain storm.

The couple had gone into the bay at Towers Road.  They called for help soon after they fell from the kayak.  Rescuers had first responded to the mouth of the Lewes-Rehoboth Canal off Bay Vista Road, but were unable to find the missing couple.  Meanwhile, the couple continued to swim toward shore.

Around 12:05 p.m., they were able to call again using their cell phone stating that they were just north of the towers and they were getting tired trying to swim.  That is when 9-1-1 plotted them about 3000 feet west of Tower Road off the Delaware Seashore State Park. 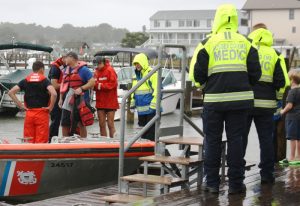 That is about where the Coast Guard’s 24-foot rescue boat spotted the couple and made the rescue.  The crew brought the couple to the Pier Point Marina in Dewey Beach where they were evaluated by EMS, given dry Sussex EMS jackets to wear, and later released.