RAL received 375 artworks from 150 artists, both RAL members and non-members. The art was reviewed by Ben Simons, the exhibition’s juror and awards judge. He is the director of the Academy Art Museum in Easton, Md.

“The range of work was strong both from the members and the non-members,” Simons pointed out during the opening reception. “There was a lot of strong photography, in particular, this year, some good watercolor work, and just a nice broad range of strong works,” he said, although he noted that fewer oil paintings were submitted this year for some reason. 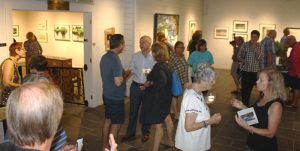 RAL sponsors this exhibition every other year. Jay Pastore, the League’s artistic director, says he likes the fact that artists who we do not already know locally apply for the show and get accepted. “So it brings people who are not familiar with us into town and starts new collaborations and relationships,” he added. “It draws a lot of people from the outside to us which is nice.”

One of the talented artists selected for this exhibition was Geo McElroy from Berlin, Md. “I really love the mystery of nature,” McElroy stated while explaining her work. “I love the layers and movement you find in water and I am lucky enough to live on the eastern shore where you can easily access water or woods and I spend a lot of time kayaking in Sinepuxent Bay and Ayers Creek and occasionally I find myself on Assawoman Bay. I love the rhythm of it and I think we are so disconnected from nature… I like the intimacy of it very much.”

On the left is Geo McElroy’s “Sinepuxent 2018” oil painting. The other oil is “Bayberry 2017.” She is more interested in movement and patterns than realism, she says.  McElroy gets many of her ideas while kayaking on the eastern shore waterways. Image courtesy WGMD/Alan Henney.

“People laugh when I say this,” McElroy adds, “but one of my favorite painters is Jackson Pollock. He did layers and layers and layers of paint that almost seemed to move, although very abstract. I am not after realism. I am sort of after the patterns and the movement.”

Frank Williams, another artist selected for this biennial exhibition, says he is very much influenced by Andrew Wyeth and N.C. Wyeth having grown up in Chads Ford, Pa. Williams studied illustration at the Philadelphia College of Art and now lives here in Lewes. The two artworks of his selected for this show depict this house found on Coastal Highway north of Lewes which he meticulously painted using egg tempera (egg yolk) on the left, and watercolors on the right. 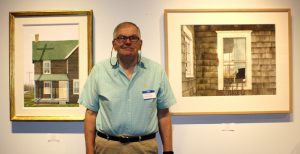 He mixes the egg yolk with water and pigment and applies the mixture to a wood panel covered with gesso. Williams also does his own framing. He gold-leafed the one frame using 24-karat gold!

This exhibition will be on display through October 13.