UPDATED – 5:30am – Delaware State Police are investigating a crash Friday night that left a pedestrian dead.  Police were called to Coastal Highway in the area of Rehoboth Avenue just after 11pm.   Police say a 56-year-old man from Rehoboth Beach, who was wearing dark clothing and carrying no light, walked out in front of a car and was struck.  Police say the pedestrian was not in a designated walkway – however, the driver of the car, a 42-year-old man from Pennsylvania, was properly restrained and not injured.

The weekend got off to a tragic start after a pedestrian was struck and killed crossing Coastal Highway late Friday outside Rehoboth Beach.

The call for help was received around 11:10 p.m.  According to one witness, the pedestrian stepped in front of the oncoming car on the southbound side in front of Coldwell Banker.  The driver of the striking car — and another driver who witnessed the accident — remained on the scene. 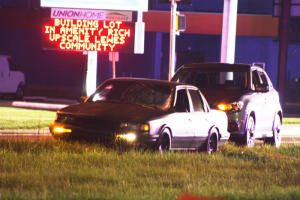 The pedestrian was pronounced dead at the scene.  The state police crash team is currently attempting to determine what went wrong.