Protest Held for Asylum Seekers and Immigrants along Coastal Hwy

Around 100 protesters holding signs and demanding change attended the “Stand for the Human Rights of Asylum Seekers and Immigrants” rally sponsored by the Progressive Democrats of Sussex County on Coastal Highway outside Rehoboth last night. 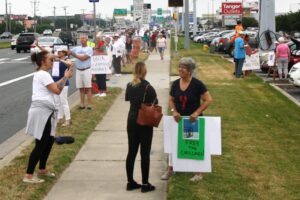 The group cheered often as passing motorists honked their horns in support.  “I am here because of the current U.S. Government policy that is dehumanizing victims of poverty and violence,” says Joanne Cabry, chair of the Progressive Democrats of Sussex County.  “We have detention camps throughout this country where we are holding civilians who are convicted of no crimes but are there purely because of the policy of the U.S. Government.  That’s why I am here,” she stated.

The event started at 6 p.m. on the southbound side near the IHOP and by 6:30 p.m. had stretched to the Exxon station.  That is when participants started lining the northbound side as well.  Cabry said she was the last to depart around 7:30 p.m.

They held a similar rally last year, but Cabry added that if things do not change, “We won’t wait another year while the U.S. Government continues to dehumanize people who come here seeking asylum.”