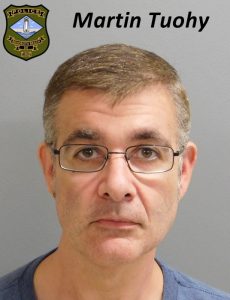 Rehoboth Beach police have charged Martin Tuohy, 45, of Middletown, Delaware after he turned himself in to police last night for causing the eight-vehicle collision that occurred in the second block of Rehoboth Avenue on July 7, 2018.

Following a nearly two-week investigation, Rehoboth Beach police have made a determination as to what occurred on the evening of July 7. As a result of the investigation, police believe Tuohy was operating the blue 2016 Dodge Ram pick-up truck as it left a parking space along the northern shoulder of the second block of Rehoboth Avenue west bound at around 6:15 p.m. As he was backing the vehicle out of the space, police say Tuohy collided with a blue 2017 Subaru Forrester driven by a female from Ashburn, Va. that had stopped to allow Tuohy to back out of the space.

After colliding with the Subaru, Tuohy, who showed signs of intoxication on scene, rapidly fled west bound on Rehoboth Avenue. As he did so he moved to the left lane where he collided with an unoccupied red Hyundai parked along the median causing minor damage to the vehicle.

Tuohy continued west bound striking an unoccupied red Ford Explorer in the next parking space causing extensive damage to the vehicle pushing it up onto the median and partially on top of an unoccupied Toyota Corolla parked next to it. Tuohy then struck an unoccupied silver Ford Fusion that was also parked in the median knocking the bumper completely off the car. As a result of these collisions, it is believed that the left front wheel of Tuohy’s vehicle came off, but he still continued west bound on Rehoboth Avenue.

Tuohy continued west bound exiting the sidewalk into the intersection where he struck a silver Honda Pilot occupied by four individuals from Montoursville, Pa. and Millsboro, Del. The Honda was stopped in the intersection waiting for two females to clear the crosswalk before turning, police said. The front of Tuohy’s pick-up truck struck the rear driver side of the Honda spinning it 180 degrees through the intersection. All four occupants of the Honda were taken to Beebe Hospital for treatment of non-life threatening injuries. The females in the intersection fled in time to escape injury. 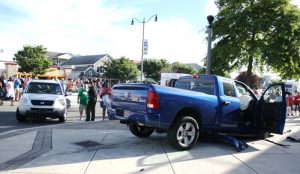 Tuohy still continued west bound, again leaving the roadway, and drove onto the sidewalk on the west side of the intersection where he struck a light pole and came to a stop. Tuohy was  taken from the scene by ambulance to Beebe Hospital where he was treated for non-life threatening injuries. 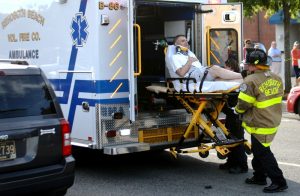 Tuohy was arraigned and released on $16,000 unsecured bail.

The investigation of this collision is ongoing. If anyone has information about the collision they are asked to please contact Det. Tyler Whitman at (302) 524-1391 or submit a tip through Delaware Crime Stoppers by calling 1-800-847-3333 or online. Anyone with information can also submit a tip online to the Rehoboth Beach Police Department via the RBPD website.