The Sussex County Council continued it’s public hearing on the proposed increase of forested or landscaped buffers for subdivisions or overlays. An additional 7 people added their comments to the record – most in support of the expanded buffer from 20-feet to 40-feet. No vote has been taken on the proposed ordinance. 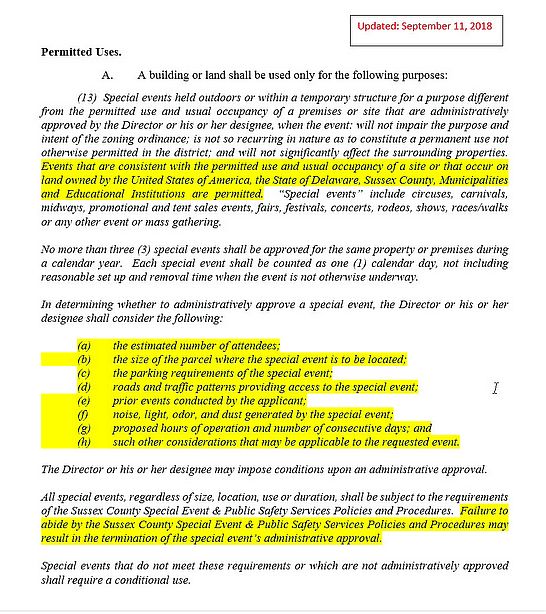 In Old Business, the council also approved an amended ordinance for short-term special events that are permitted in specific districts – AR-1, GR, B-1, C-1, CR-1 and M. The amended sections are highlighted in yellow. Councilman Rob Arlett felt there was a lot of information to go over and made a motion to defer for 2 weeks. That motion was defeated and a vote on the amended ordinance was approved by a 3 to 2 vote – with Arlett and Councilman Sam Wilson voting against.

The council also deferred a vote on CU 2127 for Wine Worx, LLC. Councilman George Cole proposed a series of conditions for the property – including that events would only take place on the front section of the property, and only on Fridays and Saturdays and that no concerts would be allowed. The council will revisit the conditional use next week.

For months, there has been public comment during County Council meetings regarding the County Board of Adjustment. The County has also received a letter from the Delaware Coalition for Open Government, which County Administrator Todd Lawson discussed with the Council and highlighted part of the county’s 7-page response. Lawson says that the county doesn’t agree with all of the issues cited, but “if and where possible the county will consider their feedback and adjust our operations to make the necessary improvements.”

The County is joining Sussex County Volunteer Delaware 50+ and the State Office of Volunteerism in collecting donated items for Stockings for Soldiers at the County offices on the Circle in Georgetown. These items will be sent to deployed service members and K-9 members who are away from home during the Holiday Season. Donations will be accepted through the end of October. (CLICK HERE FOR THE SHOPPING LIST)

Director of Emergency Services, Joe Thomas related to the County Council a radio issue that is being seen by fire and ambulance companies that provide mutual aid to companies in Worcester and Wicomico Counties. This is because of a change in the radio systems used now in Maryland. Thomas has been looking for a fix for months. Motorola is offering a one-time 65% discount on a flash kit that will fix the issue that will be available until the end of the year. For 420 Sussex County radios – the cost comes to about $76,000 with the discount. Thomas recently been contacted by DEMA which has some grant funding of about $75,000 that could be reallocated towards this project.