The Sussex County Council started this week’s meeting with an update on the Sussex Expansion at the Bayhealth Sussex Campus. This new facility is a joint venture between Nemours and Bayhealth and will offer a variety of services that most in Sussex and Kent Counties now have to drive to Wilmington to utilize. Nemours Chief Development Officer, Cathy Kanefsky tells the council they will offer primary care, specialty care, general surgery, weight management, allergy, behavioral health and, though it wasn’t included initially – pediatric urgent care. The new medical care building at the Bayhealth Sussex Campus is expected to have its grand opening this fall. 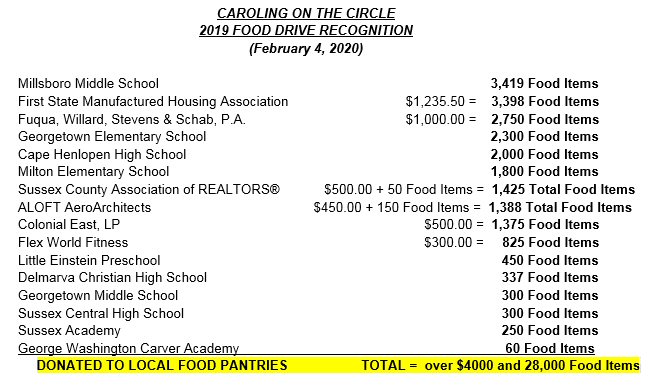 During December, Sussex County holds a food drive – to pack the pod on the Circle with food to help feed the county’s hungry. While the drive starts with the Caroling on the Circle – many schools, businesses and other groups collect food items and cash donations as well – which are included in the County’s collection. During this week’s meeting County Administrator Todd Lawson honored the groups, businesses and schools that collected food items. The list included 10 schools and a surprise top collection for Millsboro Middle School which brought in the most food items – 3419! 1st State Manufactured Housing often tops the list – but fell to second this year collecting $1235 in donations which became 3398 food items. Lawson said this year’s food drive was very successful – raising over $4000 and 28,000 food items which have been distributed by multiple local food pantries here in Sussex County.

The Council approved two appointments – Stephen McCabe was reappointed to the Board of Assessment Review for a 5 year term. On the Building Code Appeal Board, Arthur Marvel has resigned. Greg Hill has been appointed to finish that term, which ends in December of this year. Both men start their new positions immediately.

During the afternoon session the Council heard two conditional use applications.
CU No. 2202 for John Passwaters is for a landscaping business on just over 6 acres of AR-1 land on Sussex Highway in Bridgeville just south of South Main Street. The applicant spoke on his own behalf and the Council approved the application with a 5 to 0 vote.

The Sussex County Council does NOT meet next week. The next County Council session is scheduled for February 18 at 10 in the County Administration Offices on the Circle in Georgetown.