Sussex County Council This Week – Beyond the Budget

The Sussex County Council got a preview of the proposed FY 2020 Budget this morning from County Administrator Todd Lawson and Finance Director
Gina Jennings. Click here for more on the budget. 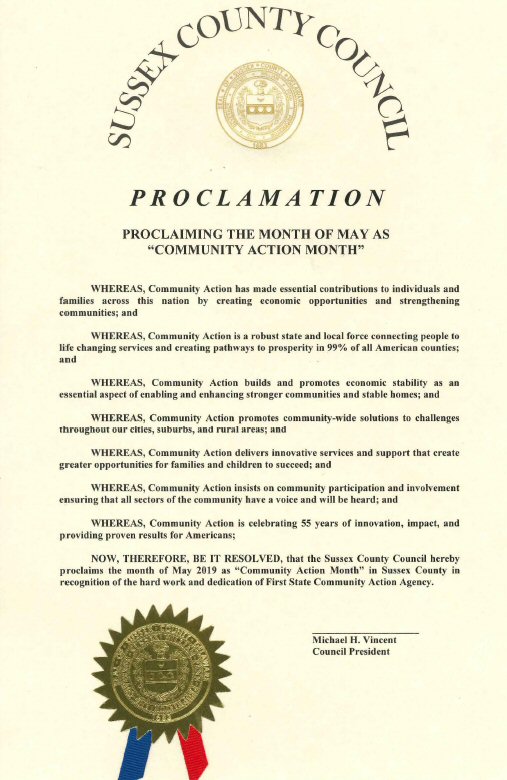 County Administrator Todd Lawson read a proclamation that says the Month of May is Community Action Month. Executive Director, Bernice Edwards, spoke briefly to the Council telling them that of the 55 years First State Community Action has been in existence – it’s been in Georgetown for 54 of them. She thanked the Council for the support they’ve provided over the years – in helping to make families and communities to become self-sufficient.

Officials from DelDOT appeared before the County Council to update and discuss with them the Capital Transportation Plan. Multiple projects in Sussex County were discussed. Councilman Sam Wilson was most interested in the Park Avenue Relocation project – which will move the airport side of the roadway to make way for the eventual extension of the main runway at the airport. Survey work has been completed so far. There is a public meeting on the Park Avenue project on Tuesday, May 28 at the DelDOT offices in Georgetown from 4 to 7pm.

Other projects and updates included House Bill 66 which has been signed by the Governor and changes the need to release a CTP (Capital Transportation Plan) from annually to biennially – every 2 years. Josh Thomas explained that the CTP they were working on for 2020 has now been moved into the 2021 CTP with other projects to eventually be added to it for consideration.

Route 1 crossovers in the Lewes area were discussed, the Five Points Project, New Road project, various projects along Route 24 and the North Millsboro Bypass. They also discussed some projects on the western side of the county including Route 404.

Housing has been a constant theme for the County Council since the start of the year. During this week’s meeting, Housing Coordinator, Brandy Nauman, and a team from LSA, the county’s housing consultant, presented a study “Sussex County Housing Opportunities and Market Evaluation (HOME).” LSA, which is based out of Virginia, has been looking at housing availability and affordability in Sussex County. This process will take some time – and includes a meeting Tuesday night in the Council chambers on Housing.

Conditional Use 2171 is an application to grant a use of land in the General Residential district for a dog bakery with storage and warehouse off Hollyville Road near Millsboro. One person spoke – not really opposed or for the project, but hoping for some clarifications. After the Council amended a sign request and that no retail sales be offered at the site, the council approved the application with a 5 to 0 vote.

There is no meeting on Tuesday, May 28 because of the Memorial Day holiday. The next Sussex County Council meeting will be on June 4th at 10am in the Council Chambers on the Circle in Georgetown.