The Sussex County Council held a public hearing this morning on the 3% lodging tax proposal.  Several people spoke during the public hearing – on both sides, however the prominent question from the public was for better definitions of how the money raised from the 3% tax on unincorporated motels, hotels and tourist homes would be spent/used.

The Delaware Code lays out where the 8% accommodations tax is to go:

§ 6102 Levy of tax and disposition of proceeds.
(a) There is imposed and assessed an excise tax at the rate of 8% of the rent upon every occupancy of a room or rooms in a hotel, motel or tourist home within this State.

(b) The proceeds of this tax shall be distributed as follows: 5% to the State General Fund, 1% to the Beach Preservation Program of the Department of Natural Resources and Environmental Control of the State, 1% annually shall be designated in the proportion in which collected, to the duly established convention and visitors bureau in each county and 1% to the Delaware Tourism Office.

In the presentation from County Administrator Todd Lawson, he explains that the 3% lodging tax on unincorporated hotels, motels and tourist homes would be used on several options.  However several who spoke during the public hearing feel the options are too broad and should be better defined like what is in the Delaware Code. 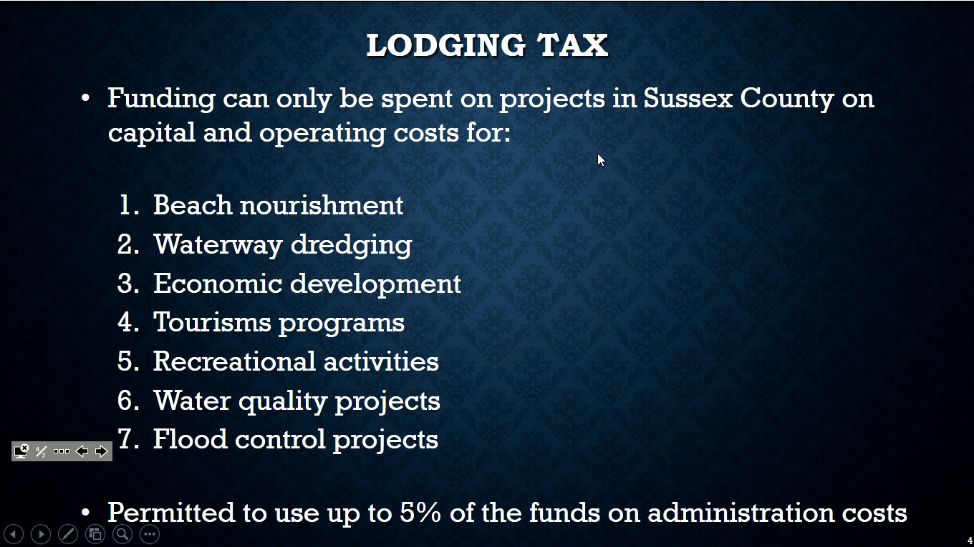 Another issue for several who spoke during the public hearing was that the definition of a “Tourist Home” is not good.  The current definition of a tourist home in the state code is

However the lodging tax does NOT include short term rentals – such as Airbnb, VRBO and the like.  It only pertains to hotels, motels and tourist homes as defined in the Delaware Code, that are located in unincorporated Sussex County.

Council vote was unanimous in support of the 3% lodging tax ordinance.