Update (June 5): Rehoboth Beach police announced today that there has been an arrest made in Saturday night’s stabbing that happened on the Rehoboth Beach boardwalk. 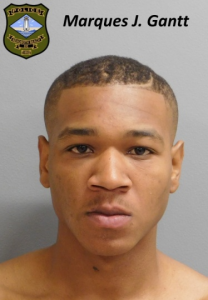 Rehoboth Beach police have apprehended and charged Marques J. Gantt, 23, of Milton. Police located him in a hotel room outside of Rehoboth. He was taken into custody without incident or injury, police said.

Gantt was arrested and charged with three felonies: first-degree assault, possession of a deadly weapon during the commission of a felony, and carrying a concealed deadly weapon. He was also charged with misdemeanor terroristic threatening.  He was committed to Sussex Correctional Institution in default of $157,500 secured bail.

All other parties from the incident have been identified. No other charges are being filed at this time, police said. Officers spent more than an hour trying to locate the four suspects, described as males in their late teens or early 20’s. An officer possibly spotted a couple of them running through yards near the intersection of Laurel and Hickman streets about 10 minutes after the initial report, but they got away. That area became the focus of the search.

The 18-year-old stabbing victim, who had made his way to Rehoboth Avenue, was conscious when he was taken to the hospital by EMS. He had a wound to his abdomen.

Late Sunday night police released this image from a cell phone camera showing the suspect who had the knife and two of the accomplices. Anyone who witnessed the incident and/or who can provide any information as to the identity and/or location of the male suspect and/or any of the accomplices is asked to please contact Det. Tyler Whitman at (302) 524-1391 or submit a tip through Delaware Crime Stoppers by calling 1-800-847-3333 or online at http://delaware.crimestoppersweb.com.