Two 17-year-old males were injured yesterday, one seriously, after the personal watercraft they were riding collided in the Rehoboth Bay around 12:45 p.m. 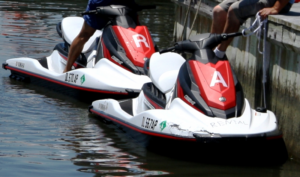 Sgt. Brooke Mitchell, Delaware Fish & Wildlife Natural Resources Police spokeswoman, says both were taken to the hospital where one was admitted in stable but serious condition.  The other was treated and released.

The two teens were riding the PWCs when they collided in the Rehoboth Bay west of Collins Avenue.  Another boat was used to bring them to shore for medical treatment after the crash.

“The cause of the incident is still under investigation at this time,” Sgt. Mitchell said.