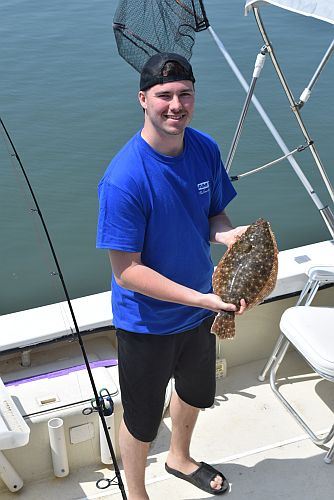 Chris Keller of Oley, PA fished out at Site 10 using minnows and Gulp baits and caught this 17 1/2″ 2lb flounder.

Tuesday was the opening day of Delaware’s black sea bass season.  Unfortunately, several boats cancelled their trips due to the weather forecast and for once the folks at NOAA got it right.  The day started out nice, but the south wind increased to 15 to 20 knots and seas were running four to six feet.  I was on the Angler out of Ocean City and we had a very bad day.  No matter where we went the fish did not bite.  I think the high hook was three fish.  I had one bite and caught the one fish.

Back in Delaware the boats that braved the weather limited out.  Tom at Lewes Harbour Marina said the Katydid had her limit and so did the Grizzly.  Down at Hook ‘em and Cook ‘em Chris said the Captain Bob cancelled due to the weather, but the Captain Ike and the Karen Sue both had limit catches.

According to Lighthouse View Tackle there were a few big bluefish caught between 6:00 and 8:00 AM.  Cut mullet and bunker or silver spoons did most of the damage.  The rest of the day was pretty much a blowout.