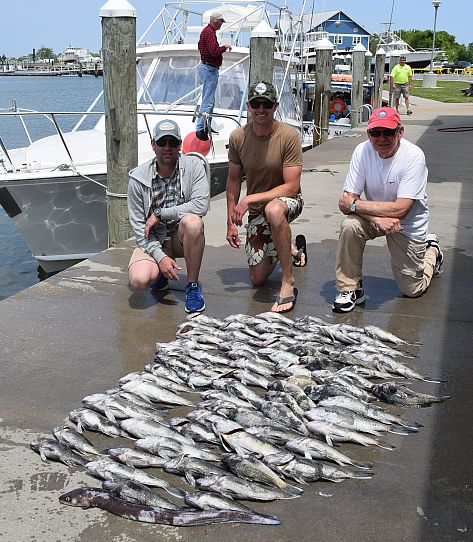 The Karen Sue had a limit of black sea bass when they used clams and squid while out at the Dry Docks on opening day. Troy Bockius, Jason Mullen and George Bockius all from Rehoboth DE.

Wednesday was a bit breezy, but the sun was out and so were the fishermen.

At the fishing Pier on Cape Henlopen State Park they saw some blues and flounder taken.  Cut bait was the ticket for the blues and live minnows or bucktails with Gulp! worked on the flounder.

At Hook ‘em and Cook ‘em Lauren said the boats that ran for sea bass had success although limits were rare.  She also saw four rockfish that were caught from the jetty at the Inlet on JP Minnows in black or purple which leads me to believe the fish were caught at night.

Clark at Old Inlet saw a black drum caught at Conquest Road on a clam.  Shad fishing remains good at the inlet on incoming water.  Clark also reported that when one customer cleaned his rockfish the belly was stuffed with sand fleas.

The report from Rick’s Bait and Tackle was from two customers who fished the inlet from the south side between the campground and the fancy development.  They had two keeper flounder and some five to eight-pound bluefish.