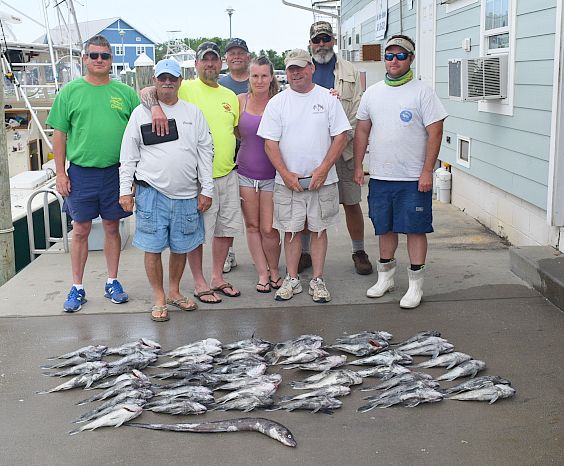 Capt. Rodney Meyers of the Last $ took a ride out to the Radford with his charter Wes Spicer of Smyrna, DE, Rich Floster of Harbeson, DE, Lisa Zawaski of Smyrna, DE, Jack Kunkle of Lewes, DE, Ken Spicer of Lewes, DE, Kyle Spence of Wilm., DE and mate Rich Harper. Capt. Rodney reported that the bite was a little on the slow side but they were catching some nice sized fish.

Monday saw sloppy seas on the ocean, cool air temperatures and scattered rain showers.  From the look of Route 1 around 10:00 AM it was a mass exodus heading north.

At Lewes Harbour Marina, Tommy said no one went out during the day, but several boats headed to Delaware Bay in the late afternoon for the drum bite.  Most of the action has been on the Coral Beds with clams the top bait.

The Captain’s Lady out of Bowers Beach is having a great year on the black drum.  He runs charter and open boat.

At Lighthouse View Tackle on the fishing pier at Cape Henlopen State Park they told us a 31-inch rockfish was caught early in the morning about 200 yards to the  east of the pier on bunker.  A few blues were taken at the same time on the same bait.

Old Inlet Bait and Tackle said a boat fisherman had a nice rockfish working the end of the North Jetty.  Another boat had blues and rock while jigging in the same location.  Rockfish have been caught between sunset and sunrise from the jetty on black or purple plugs.