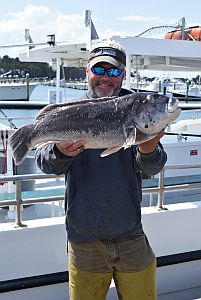 This 10.7lb and 27″ tautog was caught using green crabs by Terry Siedel of Reading, PA. He had the biggest fish of the day fishing the full day trip on the Capt. Bob II with Capt. Roger Meekins.

At the fishing pier on Cape Henlopen State Park, Lighthouse View Tackle reported a 25-inch bluefish was caught on a spoon fished from the beach next to the pier.  A few short rock and flounder were taken on bloodworms and minnows from the pier.

Lauren at Hook ‘em and Cook ‘em saw a good catch of tog come in before noon and that was the only boat out on Wednesday.

Clark, at Old Inlet Bait and Tackle said small rockfish and blues were caught from the south pocket early in the morning.  Short rock and keeper kings took bloodworms in the surf.    Julie at Lewes Harbour Marina said the Katydid had a catch of tog including citations for Captain Brent and Dr. Tony.