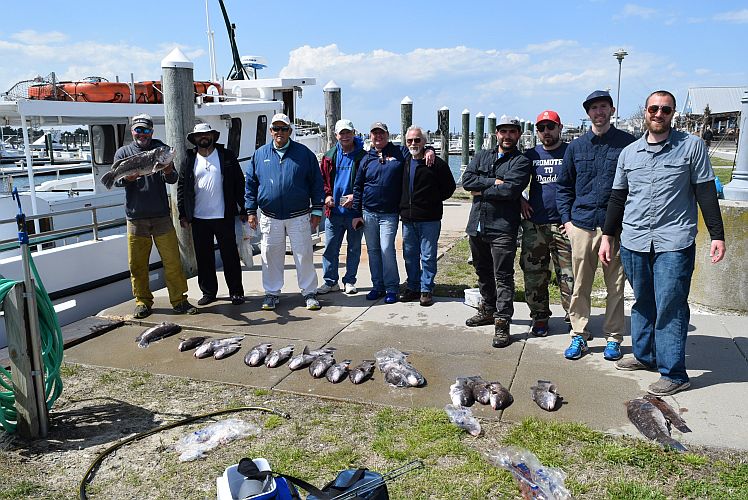 Capt. Roger Meekins took the Capt. Bob II for a full day of fishing out on the Coral Beds. Everyone wound up catching some tog and several people had their limits. Several nice sized fish were caught with the largest weighing in at 10.7lbs that was caught by Terry Siedel of Reading, PA. Green crab was the bait of choice for the day. Pictured are Terry Siedel, of Reading, PA, Tim Molina of Reading, PA, Mike Herrmann of Dagsboro, DE David and Katie Hale of Hartford County, MD, Jay Schmidt of Ocean View, DE, Nick Albanes of Lewes, DE, Charley Ruggiero of Millsboro, DE, Will Albanes of Lewes, DE and Andy Knight of Lewes, DE

As promised, I went fishing on Thursday.  My friend Larry Weldin and I put my boat (yes it ran) over at the Lewes Boat Ramp and were underway around noon.  Since the weather and the seas were so beautiful we headed towards the fishing pier at Cape Henlopen State Park looking for big blues.  There were large pods of bait that I think were bunker, but no blues.

Back at the Lewes and Rehoboth Canal at the beginning of the outgoing we fished with minnows until 2:30 when the lack of any action at all made us decide to call it a day.

The report from Lighthouse View Tackle was a few blues on Wednesday right at dark.  The bait was fresh bunker.  On Thursday it was a skate-a-thon at the pier.

Some good news for a change from Indian River Inlet.  The hickory shad are in and anglers are catching their 10 fish limit on shad darts and small spoons.  Short rock have been caught from the North and South Pockets on bucktails.

The Katydid ran a half day trip and brought in some tog.