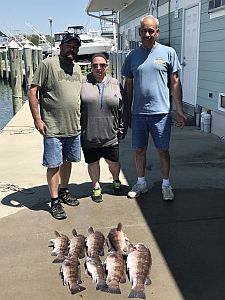 Fishing at Site 10 with green crabs turned out to be a good choice for
Jay and Amy Lighdner of Reading, PA, and Charlie Breitenbach of
Rehoboth, DE. They caught 31lbs of tautog with the largest weighing in
at 9lbs.

Tuesday was a nice sunny day if you were about five miles from the ocean.  At Indian River Inlet it was overcast, the wind was off the water at 10 to 15 knots and I had to go back to long pants and socks.  However, the shad were biting and I was able to catch quite a few during the incoming current.

I started the day with a shad dart tied behind a small spoon and a ¾-ounce torpedo sinker.  I was spending too much time untangling the two lures so I cut off the shad dart and fished the spoon about 12 inches behind the sinker.  The shad were in and out and I caught them from the center of the inlet to a few feet off the rocks.  I was fishing the Northside under the bridge along with three other anglers.  We all had the same results.

There were quite a few folks fishing for tog.  I saw one short caught while I was there.

Dave at Lighthouse View Tackle said nothing but skates from the pier on Tuesday, but keeper flounder have been caught on Gulp! and a jig worked across the bottom.