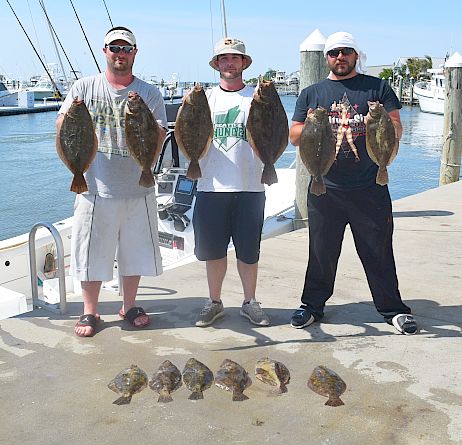 Capt. David Hopkins, Justin Smith and John Cushner, all from Newark,
caught a boat limit of flounder fishing out at B-buoy. They used squid,
minnows and fresh cut bluefish to hook up these flatties.

The weather on Saturday was pretty good, but the small craft advisory issued on Friday night was horrible.  Unfortunately, several ocean trips were cancelled due to the erroneous forecast costing the captains money and their customers a good day of fishing.  I know how the captains feel since I was a victim of NOAA Weather on more than one occasion when I ran charters out of Virginia Beach.

Tom at Lewes Harbour Marina said the Katydid came in with a catch of flounder caught over ocean structure.  The Pirate King had kings, blowfish and trout on his trip into Delaware Bay.

At Lighthouse View Bait and Tackle on the fishing pier at Cape Henlopen State Park the report was a fair day of fishing for spot with bloodworms the top bait.  Short flounder were caught on jigs, minnows and Gulp!.

Burt at Hook ‘em and Cook ‘em told us the head boats along with several charter boats did not run on Saturday due to a bad marine forecast on Friday night.  Trolling at Fenwick Shoal produced blues, bonito and Spanish mackerel.