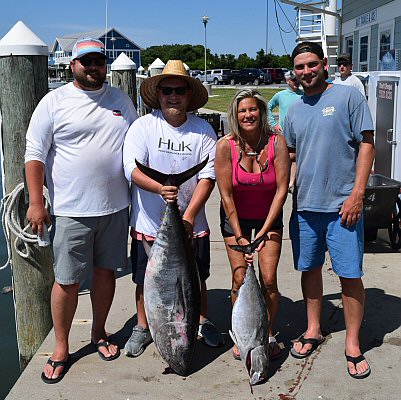 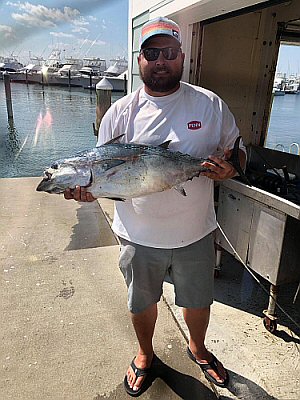 Jonathan Buchanan – the angler of the new state record False Albacore weighing in at 21.5lbs

We got late word on Wednesday from Diana at Hook ‘em and Cook ‘em that they checked in a pending new state record false albacore or little tunny.  The big fish was caught by Jonathon Buchannan from Ocean View while fishing in Massey’s Canyon aboard the Last $.  It weighed in at 21.5 pounds.  The catch will now be certified by the DNREC’s Division of Fish and Wildlife before becoming official.  Also, from Hook ‘em and Cook ‘em the Captain Bob brought in a black drum from the ocean which is a bit unusual.  Other fish across the cleaning table included a big bluefin tuna, kings, flounder, triggerfish and blues.

Old Inlet Bait and Tackle said blues are beginning to come through the inlet on incoming water.  They will hit bucktails or metal lures.  Some spot have been caught from the inlet as well.  The occasional flounder has been taken on minnows.  Kings, spot and small trout continue to come from the surf on bloodworms and FishBite bloodworms or cut bait.

This is Eric Burnley with your WGMD fishing Report.