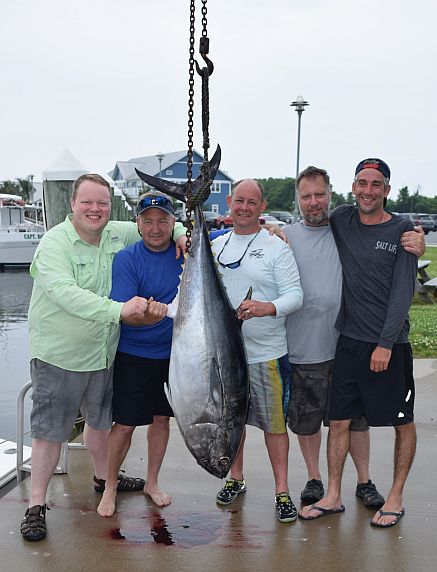 This 141.2lb blue fin tuna was caught by angler Clay Viands of Hedgesville, WV. He was fishing out at the Tea Cup using ballyhoo on spreader bars on the Bail Out. Angler Clay Viands, Capts. Rob Lewis and Frank Geck Ken Looney of North East MD, and John Whitney of Manalopan, NJ.

Thursday was sunny and dry and all of the reporting stations had good fishing news.

Tommy at Lewes Harbour Marina told us the Katydid went fishing for black sea bass returning with a good catch for her party.  Wayne Demarko brought in a 232-pound thresher shark on the Fish Bones.  Tom did not know exactly where the big fish was caught, but threshers are often taken fairly close to shore.

At Lighthouse View Tackle on the fishing pier at Cape Henlopen State Park they saw spot and croaker caught on bloodworms and FishBites early in the morning.  Short flounder with a few keepers were taken on jigheads with Gulp!.

At Hook ‘em and Cook ‘em Burt told us both yellowfin and bluefin tuna came to the cleaning table.  The head boat had a few sea bass and flounder.

At Old Inlet Bait and Tackle Clark told us one customer fished Conquest Road with bunker and caught three blues, some kings and a shark.  Another customer worked Three Rs Road to catch several blues on bunker.