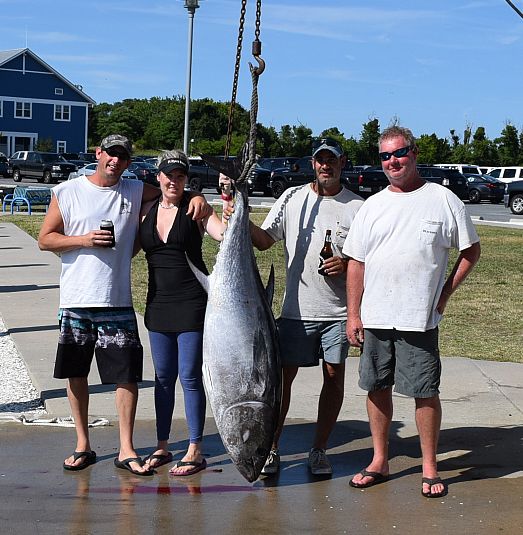 While trolling ballyhoo on the “Black Out” out at Massey’s Canyon on Friday, Sean Tate, Jaclyn Vernon, John Porter and Capt. Rob Thompson, all from Dagsboro, DE, caught this awesome 186lb blue fin tuna. Rob, John and Sean all had a hand on the rod with this monster, but Rob is the angler that finally got it to the boat.

Saturday was a beautiful day with bright sunshine, calm winds and mild temperatures somewhere, but not in Delaware.

Let’s catch up on a few reports we didn’t have time for on Friday.

From Lewes Harbour Marina the Katydid had a mixed bag of flounder, sea bass and porgies while Brad Young fished the Old Grounds and returned with flounder to 19 inches caught on squid.  Captain Keith Beebe on the Surface tension took his dad Dave Beebe and Lauren Rentz to B Buoy and the Old Grounds where they released a 30-inch cobia and caught some small dolphin and keeper flounder.  Rick Roberts fished Massey’s Canyon on the Sea Hunter to catch a bluefin tuna.  Ralph Short used a Rick Rig to catch a limit of flounder between 18 and 22 inches from the Canal.

We spoke with Rick’s Bait and Tackle on Friday and they said the Paradise Grill had a flounder tournament in Indian River and Rehoboth bays scheduled for Saturday with 400 contestants registered.  We will try to have the results on Sunday’s report.