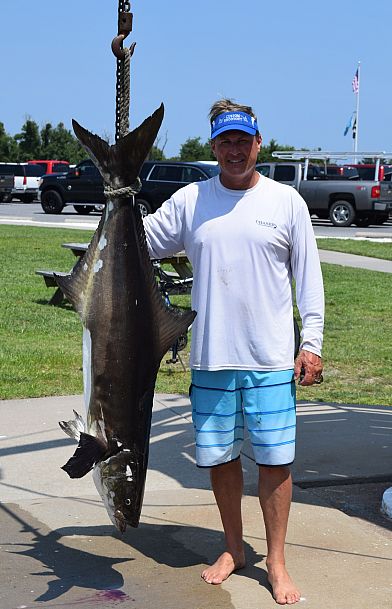 John Burbage III of Ocean View, DE caught this 79.4lb and 48 1/2 inch long cobia while fishing 2 miles off the cost of Bethany Beach, DE on Friday. John said that he snagged some live bunker then cast into the school of bunker and retrieved the line in quickly to catch this monster of a fish.

Monday was another good weather day and we heard of some decent fishing in the bay and ocean.

Cobia are quickly becoming a primary target for Delaware anglers.  Right now the state does not have a cobia plan, but one is under development and none too soon.

On Monday morning I received an email from my friend Jeff Waxman.  It seems he along with Pat Petrera and Steve Redden went out on Sunday afternoon in Pat’s 31-Bertram the Priceless looking for cobia.  The found 25 of them swimming on the surface and managed to catch three.  Two were taken on bucktails and one ate an eel.  Then I received an email from Hook ,em and Cook ‘em telling me about John Burbage III who fished two miles off of Bethany Beach where he snagged a menhaden and fed it to a 79.4-pound cobia.  That is one big cobia no matter where you fish. 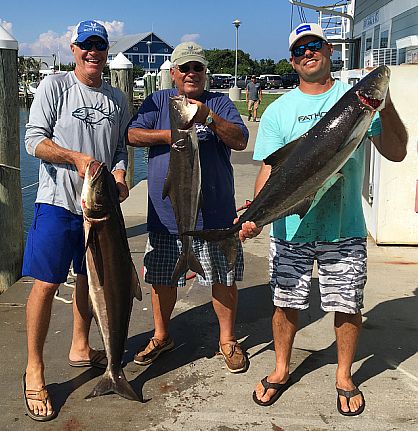 Three cobia hooked n caught..all on light spinning rods…10 lb class. Two caught on my iconic Cape Fear spinner! Team worked great…Pat, Steve Redden and Jeff Waxman. Caught two on bucktails n one on eel. Once gaffed and in the boat, the real fight begins…boating a big cobia starts a heavyweight slugfest! All caught within six miles off Indian River not half mile off beach.

Flounder fishing remains good in the ocean at the Old Grounds and there seem to be a lot of croaker in Delaware Bay.  Kings are the best bet for surf fishermen.