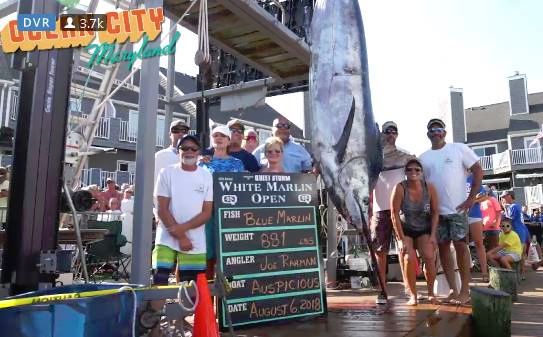 First day of the White Marlin Open – second boat in to the scales “Auspicious” from Palm Beach, FL brought in an 881 pound Blue Marlin, caught by Joe Rahman.

Monday proved to be one of the most enjoyable days I have ever spent on the ocean.  I was up at 2:00 AM on the road by 2:30 and at the boat by 3:45.  The boat was the Toast docked at slip 33 in Harbor Island on 14th Street in Ocean City.  The event, the White Marlin Open.  We were underway at 4:30 and arrived at the Washington Canyon around 8:00.  Lines may not be put in the water until 8:30 and when the time arrived the crew was rigged up and ready.

We caught two gaffer dolphin right away then went on a dry spell until after lunch when we put another gaffer in the box.  In spite of one of the hardest working crews I have ever fished with we were unable to bring a white or blue marlin to the boat.  All the good signs were there.  Plenty of porpoise, flying fish, pilot whales and, according to the SONOR, lots of bait from the top to the bottom.

The Auspicious out of Palm Beach did have some luck bringing an 881-pound blue marlin to the scales to take the lead in that category.