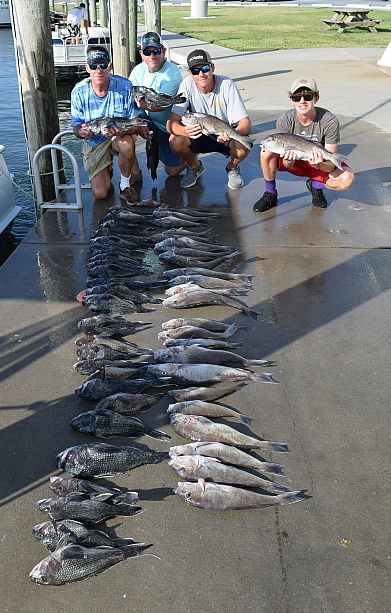 Fishing out at the Rock Pile was very productive for the crew of the Even Keeleigh. They were deep dropping squid and cut bait to bring back this batch of large black sea bass and some very nice blue line tile fish. Pictured are Capt. Mike Babcock, Tom Schanno, Brandon Arnett and Ian Fifer.

Wednesday was not a bad day, but very little fishing was done.

Lighthouse View Tackle on the Fishing Pier at Cape Henlopen State Park reported they saw a lot of short flounder and spot during the day and late in the afternoon the blues moved in range.  These are all small fish, but I understand some of the spot are eating size.

I spoke with Captain John Nedelka this afternoon and he had the Karen Sue out in the ocean on Tuesday.   He said it was just him and Wes Townsend and both boats had to wait awhile for the fog to lift before going through Indian River Inlet.

Captain John first tried to find some dolphin, but the water temperature had dropped six degrees and the dolphin were gone from the inshore grounds.  He ended the day wreck fishing putting 24 sea bass in the boat for a party of four.  He said the sea were big, but far apart so he could run at a reduced speed.  For what it’s worth, Wes didn’t see many dolphin on his marker buoys further offshore.

This is Eric Burnley with your WGMD fishing report