The Rehoboth Beach Museum officially reopened this past weekend after an eight-month-long construction project that renovated its second floor.

The construction project first started in 2005-06, says Paul Kuhns, Rehoboth Museum president and Rehoboth Beach mayor. At that time, Mayor Kuhns explained, they took the “old ice house” and started construction by building a new frame to start the museum.

“We opened up in late 2007 with the idea that the second floor was the next phase,” he recalled. “That was 2007, and now it is 2018!  We have accomplished what we accomplished because of all of you,” Mayor Kuhns told members and supporters at this past week’s opening.

The second floor was an old attic in the old ice house with cork and bare brick, he pointed out. Now, “we’ve got something that we can really show off to the community and that’s why we are really happy that you all are here tonight,” Mayor Kuhns told the crowd.

The second floor expansion adds more than 2,000 square feet of usable space to enhance museum operations, including a 700-square-foot exhibition space, a 700-square-foot multi-purpose room, a library, work room and storage space along with an elevator. 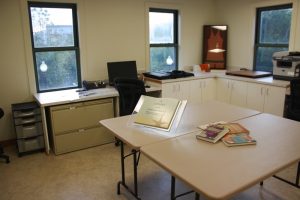 The library has a wonderful view of the Lewes-Rehoboth Canal.  Image courtesy WGMD/Alan Henney.

Also, permanent collections exhibitions on the first floor have been dramatically re-designed. “We are excited by the opportunities the expanded facility will provide for dramatically increasing our permanent exhibition displays, and for being able to offer a greater variety of special shows, lectures, and events,” says Nancy Alexander, the museum’s director.

The permanent collections on the first floor now have a new look.  Image courtesy WGMD/Alan Henney.

“The Museum wants to thank the many friends and patrons of the museum who have contributed to our expansion fund and to numerous organizations and foundations that have supported this effort through generous grants,” Mayor Kuhns added. “We have been conducting fund-raising efforts for the project for over three years, but waited to commence construction until the fund-raising goals were nearly met,” he pointed out.

“We were able to raise this money over time without having to take any loans which was very important from our perspective to not go into debt to build this,” Mayor Kuhns explained. “And so we waited and we waited, and over time the generosity of all of you here in this room and as well as many others has made this worthwhile for us to be able to accomplish what we accomplished.”

The museum exhibits a fascinating collection of historical memorabilia such as these police badges.  Image courtesy WGMD/Alan Henney.

“It’s wonderful having the museum finished again. The upstairs is gorgeous and I think everyone in Rehoboth will enjoy it,” says Charlie Browne, Rehoboth Beach Homeowners’ Association president.

Programs have already been scheduled for the upcoming months, including some of the museum’s favorite lecturers.

On September 13, at 7 p.m., Mike Morgan will host the program, “Treasures of the Rehoboth Beach Museum:  Images of the Past.”  He will delve into the variety of pictorial items the society has collected over the years.

On September 18, at 2 p.m., John Gauger will return with a reprise of his program “Propaganda and the American Revolution.”  Last spring this program was so popular that the museum could not accommodate all who wanted to attend.  So Gauger has agreed to return and repeat his program.

On September 15 is the opening of the museum’s annual needlework exhibition.

Historical walking tours return at 9 a.m. on September 20 and October 4. The tours begin at the bandstand and provide a “gentle guided stroll” around downtown.

On September 29, at 7 p.m., the museum celebrates Rehoboth history with a Retro Sock Hop.

On October 5, the renowned Acoustic Jam will return!

The Jolly Trolley Bus tour offers a “step back in time” with a 50-minute guided history tour of the city, including a welcome from the Reverend Todd, founder of the Rehoboth Camp Meeting Association, and a lady parishioner at the historic Anna Hazzard Tent House. They will be held on October 26 at 9 a.m. and 11 a.m.  The Trolley tours start and end at the Anna Hazzard Museum at 17 Christian Street.

Reservations for these and other programs can be obtained by leaving a voice message at (302) 227-7310.  To check for costs and other information see the calendar on the museum website.