UPDATED 3:30am – Storms rolled across Delmarva Friday afternoon around 2 – but in Dewey Beach there was quite a lot of damage when winds took out a utility pole, trees and left several streets covered in debris.  The damage was in the area of Dodd Road from Salisbury Street to Dutch Road.  Delmarva Power was on the scene to help restore power.  Sussex County Emergency Management was also called to survey the damage.  The National weather service reports that the damage may have come from straight line winds during the thunderstorm.

Click here for additional pictures from the Rehoboth Beach VFC 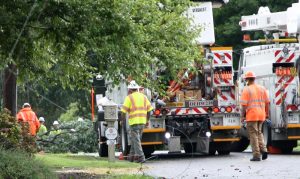 But amazingly, no injuries were reported after strong winds came through this neighborhood just west of Dewey Beach around 2 p.m.  Officials closed the streets while utility crews could repair the damage and officials could survey the adjacent neighborhoods for related storm damage.  The damage seemed to be centered around the 300 block of Dutch Road which is off Dodd Avenue. 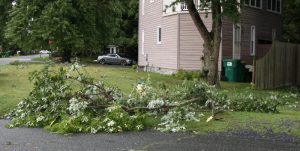