The Jam Night will be held in the new lecture hall, which was added as part of a major renovation of the museum’s second floor.

“The Front Page was a kind of melting pot of live music in its era. It fostered a lot of different kinds of music, and gave local musicians a chance to express themselves in front of an always-supportive audience,” said Terry Plowman, former owner of The Front Page. Plowman will once again emcee Acoustic Jam Night and will perform. 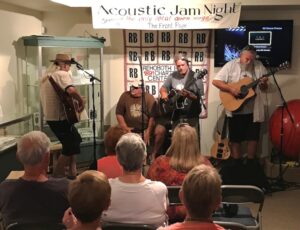 Over the 10 years of Acoustic Jam Night, hundreds of amateur and professional musicians performed for an enthusiastic crowd every Tuesday in the summer and every Saturday in the off-season.

Original players from the Front Page era will return, including Bill Robertson, Steve Wilson, Ken Thompson, and Mike Long, all members of the house band that accompanied many of the performers. Other players will include Stuart Vining and his singing partner, Amy Felker; Walt Hetfield, music teacher at Rehoboth Elementary and a former Front Page regular; Bill Richardson, Kent Schoch, and others.

The Rehoboth Museum’s Acoustic Jam Night sells out every year, so get tickets now by calling (302) 227-7310, or stop by the museum to pay in person.

Reservations are limited. The cost is $20 and must be paid prior to the event. The museum is next to the visitor center at 511 Rehoboth Ave.  Parking is available and the museum is handicapped-accessible.

The Rehoboth Beach Historical Society and Museum are a nonprofit organization. The society’s mission is to preserve and showcase artifacts that illustrated the development of the community.