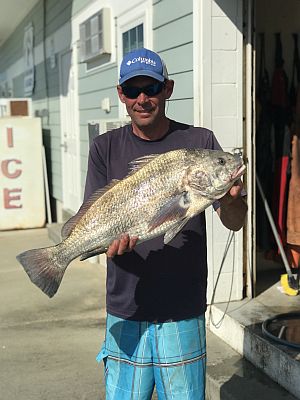 While fishing with clam on the beach at Conquest Rd., Tom Hudecheck of Lewes, DE caught this 12.3lb black drum and a puffer fish.

Wednesday was another nice day, except at the beach where the wind off the water made for some chilly air temperatures.  The water temperature at the Lightship Buoy is 53.8 and at Lewes it is 59.7 degrees.  When I fished out of Lewes last Thursday the water temperature went from 59 to 61 degrees so there has not been much warming over the past week.

At Old Inlet Bait and Tackle, Clark said one customer had a few small blues while casting artificials at daybreak.  The inlet continued to produce shad on spoons and darts during incoming water.  A few small rockfish have been caught out of the South Pocket on bucktails early in the morning.

At Lewes Harbour Marina, Julie told us the Katydid had about 15 tog for his party.  One flounder came in from the Canal.