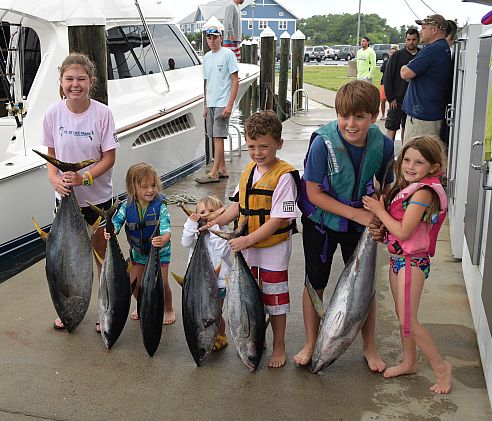 It was a kids trip on the Boy’s Toy this weekend with Bella, Mary, Angela, Lucas and Francesca Gessler and Jude Knowles fished out at the
Wilmington Canyon and brought back these unlucky tuna.

The weather on Tuesday was not that bad, but only a few folks went fishing.  Reports were pretty slim from those that did make it out.

At Lewes Harbour Marina the report was no report except for some skates caught at B Buoy.

The news from Lighthouse View Bait and Tackle on the fishing pier at Cape Henlopen State Park was some small flounder, spot and croaker.  The flounder went after jigs decorated with bright colored Gulp! while the croaker and spot take bloodworms.

Chris at Hook ‘em and Cook ‘em told us a few flounder were caught from the ocean, but described the bite as slow.  The offshore fleet that went out on Monday returned late in the day with tuna.  Several charter and private boats have left on overnight trips and will be back on Wednesday.

Clark at Old Inlet Bait and Tackle said nothing had come into the shop since early morning when a few keeper rockfish that were caught during the night were reported.  Casting plugs and drifting sand fleas have both produced good results. Summer is here and the weather is good.  Let’s go fishing!