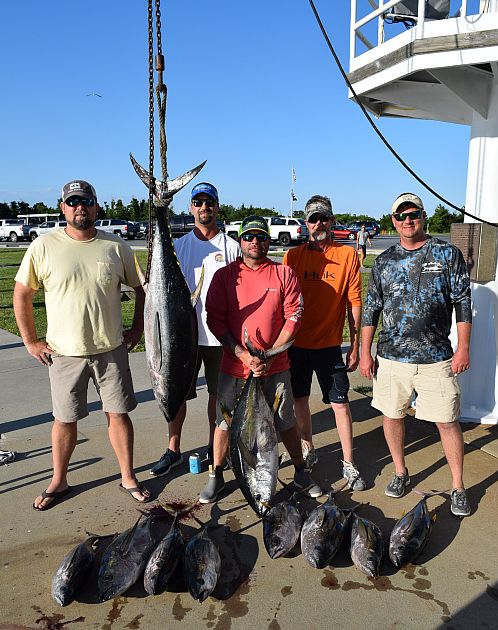 Capt. Dave Eberle of the “Out of Control” fished the Baltimore Canyon using naked ballyhoo on a spreader bar and got hooked up on a nice catch of yellow fin tuna. 9 yellow fin in total were caught, with the largest one weighing in at 90.6lbs. Pictured are Matt Purnell, Mike Schimel, Jason Hull, Roger Satterfield and Robb Warfel all from the Milford, DE area.

Friday was a beautiful summer day and the fish were snapping.  The good news, if the NOAA marine forecast is correct, is we will have a run of five days or more with excellent sea conditions for whatever type of fishing you enjoy.

Want to try something different?  Jerry Taylor at Taylored Tackle told us that snakeheads have been caught at the spillway below the dam at Records Pond.  Live minnows have been the most popular bait.

At Lewes Harbour Marina Tommy said the Katydid had more trout from Delaware Bay.  The FOMO had sea bass over ocean structure and flounder were caught out of the Canal.

Dave at Lighthouse View Tack told us croaker were caught along with spot and short flounder from the fishing pier at Cape Henlopen State Park.  Bloodworms for the croaker and spot and live minnows for the flounder.

Chris at Hook ‘em and Cook ‘em told us the offshore boats are still bringing in tuna.  Flounder fishing was slow on the morning trip due to poor drift conditions.

Clark at Old Inlet said croaker were caught from the rocks and flounder were taken from the southside of the inlet.