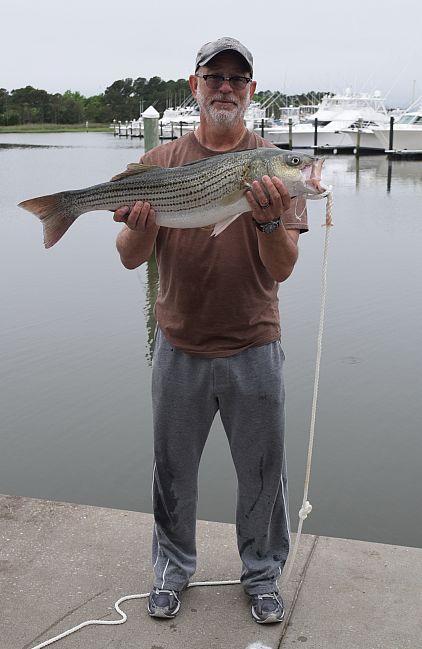 Wayne Davis of Rehoboth Beach, DE caught this 11.3lb 31 1/4 inches using a 1oz Bass Assassin with a rubber worm. They were fishing in the Indian River Inlet on the south side on incoming tide

Friday got the weekend off to a good start, now if the rain lets us fish on Saturday and Sunday things may get back to some sense of normal.

Amanda at Lewes Harbour Marina said the Grizzly came back from ocean structure with a good catch of sea bass.  Keeper flounder were caught from the canal on bucktails with Gulp! and squid and minnows.

At Lighthouse View Tackle on the fishing pier at Cape Henlopen State Park they saw keeper flounder and some spot, but the action was slower than on Thursday.  On angler had a 16-inch trout.

Burt at Hook ‘em and Cook ‘em recorded a 4.6-pound sea bass for Randy Ebbinger who fished on a private boat 35 miles east on the beach.  Yellowfin tuna were caught at the Spencer and bluefins were taken along the East Wall of the Baltimore.  Shelia Lmoll caught a four-fish limit of flounder from Indian River Bay.

The best bet for the weekend will be close to shore where you should find a few flounder, kings and blowfish.