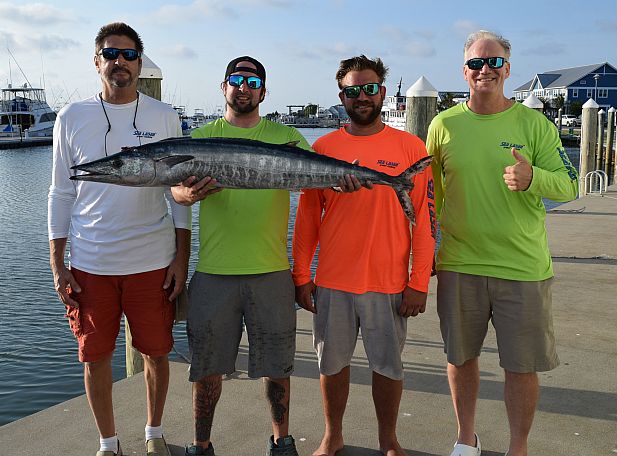 Friday began with perfect weather, but by noon the wind had increased from the southeast and Delaware Bay was a tad sporty.  The two old men in the 16-foot boat finally caught a few fish.  We went out to Reef Site 8 where we found kings, croaker and trout.

Tommy at Lewes Harbour Marina reported the Dave Walker crew had a 97-pound bluefin on Thursday.  Lamar Meekins caught an 18-inch flounder out of the canal on a minnow.  Dave Voorhees had a 47-pound bluefin at the 12-Fathom Lump while on the Snow Goose.  Nicole Harper was on the Angler with Captain Ted when she caught a citation 1.23-pound king on a clam bait.

At Hook ‘em and Cook ‘em Chris told us John Border brought in a 182-pound bluefin from Massey’s Canyon while fishing from the Black Out.  Captain John Nedelka on the Karen Sue brought in bluefish from Fenwick Shoal.

Old Inlet Bait and Tackle said the croaker caught from the inlet are getting larger with 10-inch fish taken on Friday.