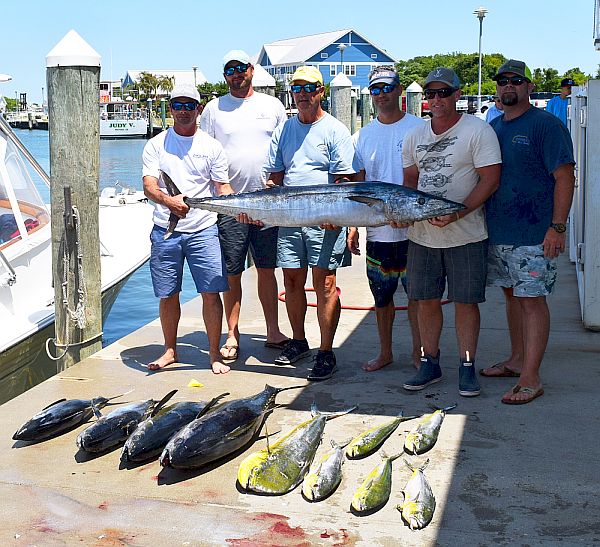 This 63.5lb wahoo was caught by Jacob Webb of Lewes, DE and a 23.1lb mahi was reeled in by Brian Perry of Wilm., DE while fishing out at the Washington Canyon on the “Line One” using a Joe Shute lure on a spreader bar. Pictured are Jerry Perry, Brian Perry and Corey Falgowski of Wilm., DE, Barratt Cullen of Rehoboth Beach, DE, Fiore Celano of Newport, DE and Jacob Webb of Lewes, DE

Monday was windy and it looks like small craft advisories will be up for the rest of the week.

The Paradise Grill held their Inland Bays Flounder Tournament over the weekend under some pretty bad weather conditions.  Nevertheless, flounder were caught and money was won.

Keven Stevenson came in first with a 4.3-pound flounder worth either $10,000 or a brand new pontoon boat and motor worth $23,385.  Keven took the boat and motor.