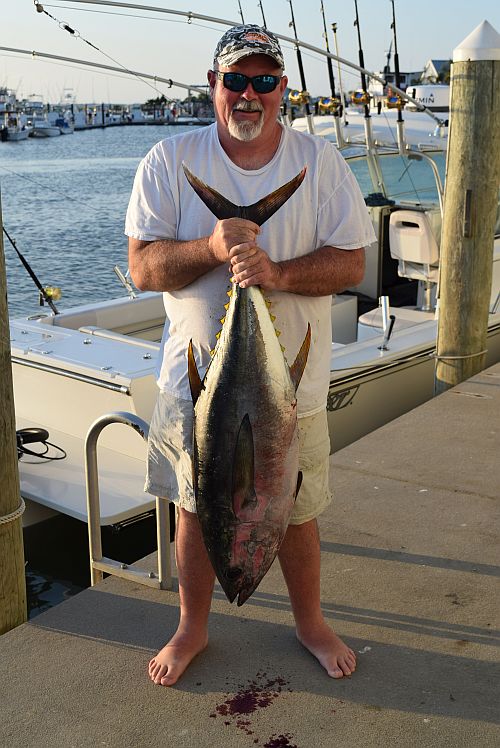 This 47lb yellow fin tuna was caught by Mark Cain of Middletown, DE while fishing at the notch of the Hot Dog using a Green Machine lure on the “Makin’ Time”

Saturday saw pretty good fishing in the ocean and the bay.

Amanda at Lewes Harbour Marina told us the party from the Lisa out of Ocean City brought a catch of bluefin and yellowfin tuna caught on the troll and the chunk at Massey’s Canyon along with some dolphin and triggers taken from under a floating log on the way home to Tony for some expert cleaning.  Jason Vavala and his grandson Thomas Murphy had three flounder from 17 to 21 inches at Site 8.  The Miss Kirstin brought in a good catch of flounder from ocean structure.  Bill Foreman fished Roosevelt Inlet with minnows to catch two flounder to 5.42 pounds.  The Pirate King worked bay structure to bring in kings, triggers and croaker.

Lighthouse View Tackle on the fishing pier at Cape Henlopen State Park told us the spot and croaker action was good with bloodworms the top bait and a couple of keeper flounder were caught on live minnows.

At Hook ‘em and Cook ‘em Chris said the Jet Black brought in tuna caught at Massey’s Canyon.  Triggerfish came in from the wrecks at Fenwick Shoal.