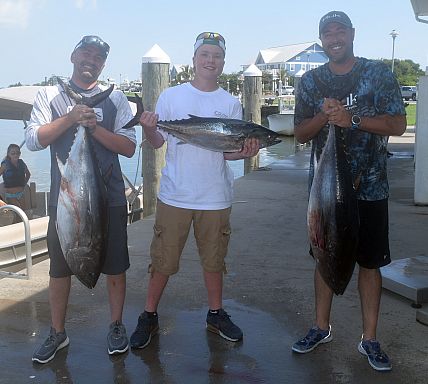 Eric Van Dyke, Nick Van Dyke and Roger Clappe all from Wilmington, DE fishing on the Risk Reward out at Massey’s Canyon chunking with butterfish and sardines and brought back their 3 blue fin tuna with the largest weighing 47 and 48lbs.

Saturday was the fourth day of the Flounder Pounder Open from Paradise Grill sponsored by Short’s Marine and the results changed the leaderboard.  Yahoo’s moved into first place with a 9.8-pound flounder.  Stalker is now in second and Sea Hawg has moved to third.

Amanda at Lewes Harbour Marina told us The Sea Hunter deep dropped at the Baltimore Canyon returning with 29 rose fish, two golden and two blueline tilefish.  Hunter Walsh fished near the fishing pier at Cape Henlopen State Park and managed one keeper flounder on an Otter Tail attached to a jig.

The beach is always crowded on the weekend, but those who get out early or stay late find a few kings on bloodworms.

At Hook ‘em and Cook ‘em Chris told us it was a slow day.  A few flounder came in from Site 10 and that was about it.  The tuna fishing at Massey’s Canyon has not attracted many boats over the past week.