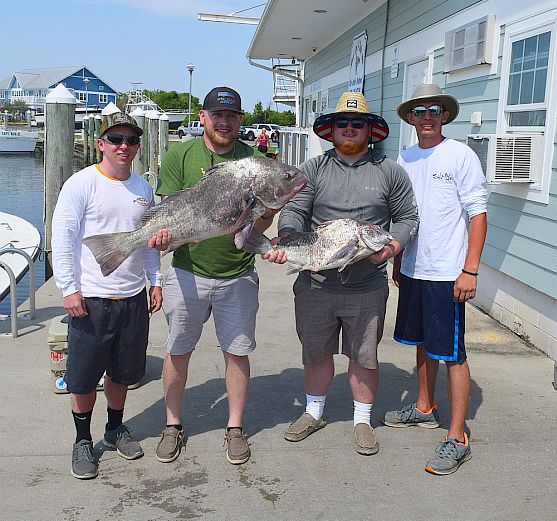 Drum fishing in the Delaware Bay was good for James Feder, Zach Markel, Cole Payne and Dylan Dunkle all from West Virginia. They kept these 2 that weighed 12lbs and 6lbs and release another 8. Clam was the bait of choice.

When I went to bed on Saturday night it was summer.  When I woke up on Sunday morning it was winter.  Not many folks fished during the winter.

Captain Bob Trowbridge on the Captain’s Lady had eight black drum on the boat Saturday night.  He also treated his customers to a free thrill ride as the squall line came by while he was still out on the water.

At Hook ‘em and Cook ‘em Burt said one boat fished the Delaware Bay and caught ten black drum, releasing eight.  Another boat also came back with two black drum on board.  Night time jetty jockeys are picking up a few keeper rockfish on white bucktails with a white plastic worm.  Shad and a few small bluefish have been caught during incoming water on darts and small spoons.

Steve at Smith Bait told us keeper rock have been caught from boats chunking bunker at the Augustine Jetty.