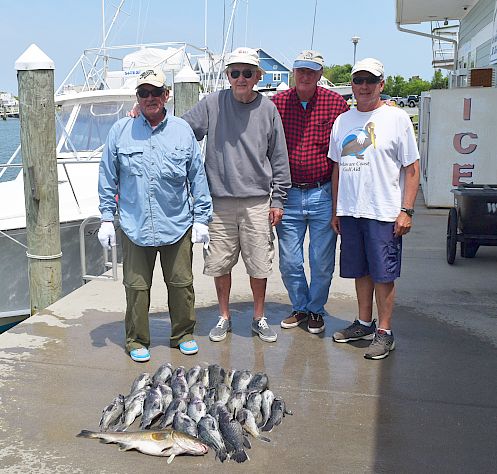 Opening day for black sea bass was good for the crew on the Spectacle. Capt. Doc Peoples, Kenny Vincent, Harry Lewis and Lex Robertson all locals from Delaware caught 35lbs using clams and squid out at the Del-Jersey site. Lex Robertson also caught an Atlantic Cod while out fishing.

Thursday was another good weather day and both boat and shore fishermen found some action.

At Lewes Harbour Marina, Julie told us that the Katydid came in with 85 sea bass for her party.  Mark Ostroski caught a 4.6-pound flounder out of the Canal on Gulp! and a bucktail.  Also from the Katydid, Brandon Mumford had a 10.61-pound monkfish.  Bob Oswald fished the Canal with a bucktail and Gulp! to catch a 21-inch flounder.

The Captain’s Lady fishing out of Bowers Beach had 14 black drum out of 22 bites on Tuesday night.

At Old Inlet Bait and Tackle they said the rockfish came back on Wednesday night and were caught from the North Pocket and west of the bridge past the parking lot for the Campground.  Black or purple plugs such as the SP Minnow and Bomber were the hot lures.

There was discussion on Saltfish about the placement of channel markers in Indian River Bay.  The waterway will be crowded this weekend so please be careful and wear your PFD.