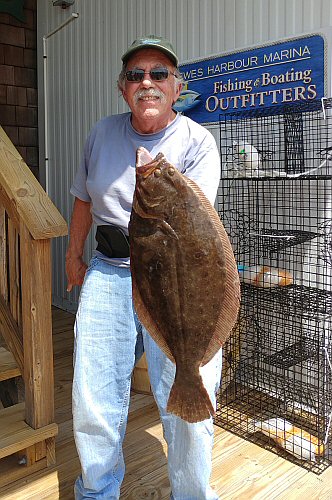 This is Mike Pizzolato with a seven-pound flounder he caught on Monday while fishing on the Katydid.

Monday was a beautiful summer day so my wife Barbara and I went fishing.  We launched our boat at the Lewes ramp around 10:00 AM to catch the incoming current and fished several locations from the Ferry Wall to the Inner Wall to the area between the two fishing piers.  We had no luck until we fished between the piers where Barbara caught two short flounder on minnows and Gulp! and I caught some spot on bloodworms.  That turned off so we moved to Broadkill Beach where I had the best fishing of the day in nine feet of water directly off the large boat shed.  I put five kings in the box and caught several short trout.  We were back at the ramp at 3:30 PM.

Old Inlet reported Duane Gray caught the first pompano from the surf followed by Alex Scott with the second.  Croaker are still in the Inlet.

On Sunday the Gale Force had nine keeper flounder from the Inlet.

This is Eric Burnley with your WGMD fishing Report.